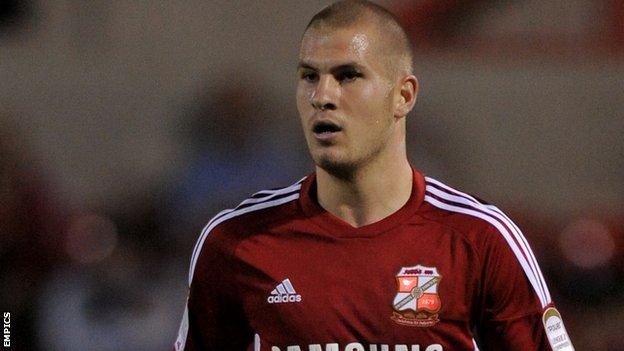 The 22-year-old came on as a 60th-minute substitute and scored a 12-minute hat-trick before adding a fourth late on in the 5-0 win.

"I'm over the moon to contribute the way I did," he told BBC Wiltshire.

"But I thought the hard work was done before I came on and the lads had worn them down. I got on, I was able to get the chances to get my goals."

Who is James Collins?

The former Aston Villa trainee joined the Robins in the summer from Shrewsbury where he scored 16 goals last season.

Ten of his 27 appearances so far at the County Ground have come of the bench and but he has managed to score 12 goals in total, including a memorable hat-trick in the League Cup win at Premier League side Stoke City.

Asked which one of the four he enjoyed most he said: "Probably the hat-trick one, the header, which was my first league hat-trick which was great for me.

"I haven't been in the team over the past few weeks and I thought if I get on and just get one goal and help the team win, it will hopefully push me through to starting back in the team.

"I've had to wait for my chance but I'm always confident that if I play I'll get the goals, so happy to get the goals today and hopefully prove my point."