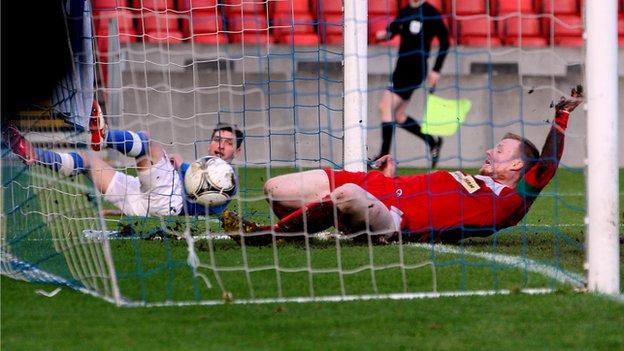 Manager Tommy Breslin is confident Tuesday's defeat at Linfield will not halt Cliftonville's charge towards their first title for 14 years.

The Windsor Park reverse was the Reds' first league defeat since October and they are six points ahead of second-placed Crusaders with a game in hand.

"We have lost one match, it is not a disaster," said Breslin.

"Linfield's season depended on beating us but they are still a long way behind and I am sure we will come back."

Cliftonville's next league match is on Monday when they are at home to Glentoran and boss Breslin is backing his players to bounce back following that rare defeat.

"We knew we were going to lose sometime and we have always responded positively.

"It just did not happen for us against Linfield. It was not a poor performance, we created plenty of opportunities."