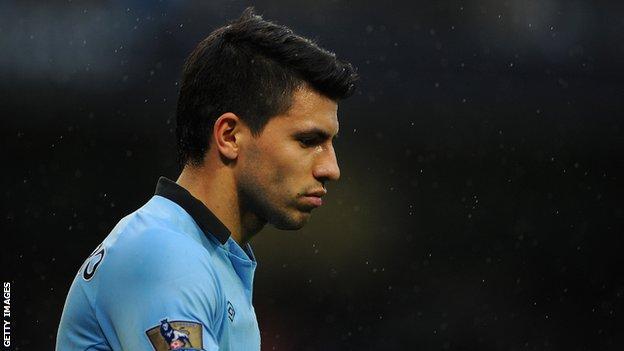 Manchester City fear Sergio Aguero could miss their vital game against Arsenal at Emirates Stadium on 13 January because of a hamstring injury.

The £38m striker limped off soon after scoring from the penalty spot in City's 3-0 win over Stoke on New Year's Day.

"I have to take a 48-hour rest and have some studies done on the injury. I'll keep you posted. Thanks for the support! It was great to end and start the year with a win. Too bad about the crick [injury] when we were wrapping up the game."

"It's difficult to assess an injury like that but my experience says he is doubtful for Arsenal," said assistant manager David Platt.

"There will be a lot of swelling in there and a bit of bleeding and we will not know for 48 hours how long he will be out for."

The game with the Gunners is City's next in the Premier League and comes on the same day leaders Manchester United - who hold a seven-point lead over them at the top - face Liverpool in another crunch match at Old Trafford.

City boss Roberto Mancini tried to play down the injury, adding: "I don't think it is serious. His hamstring is sore, maybe in 10 days he can recover."

Aguero is City's joint-top scorer this season with 10 goals, along with Edin Dzeko who also found the net against the Potters.

The pair of them have scored five of City's seven goals in their last two games, after also helping see off Norwich 4-3 on Saturday.

Any long-term absence for the 24-year-old Argentine would be another blow for Mancini, who will definitely be without key midfielder Yaya Toure for the rest of January.

Yaya Toure played the 90 minutes against Stoke but along with his brother, defender Kolo, will now join up with the Ivory Coast squad for the forthcoming Africa Cup of Nations and could be in South Africa for as long as six weeks.

"It is irrelevant whether Yaya disappears or not," added Platt. "The challenge is to keep winning football matches.

"We have a squad of players that we have to choose 11 from. Whichever 11 we put on the park, we would expect to go out and take the points."

Some good news for City is the return to fitness of striker Mario Balotelli, who did not play over the festive period because of a virus.

"Mario has been back on the training pitch for the last two or three days," Platt explained.

"It looks like he has shifted the illness now. The problem he had was that he was ill, came back and trained but then had a relapse and went down ill again.

"It looks like he is past that now and we have another three days before the Watford game at the weekend so there is every chance he will make that one."