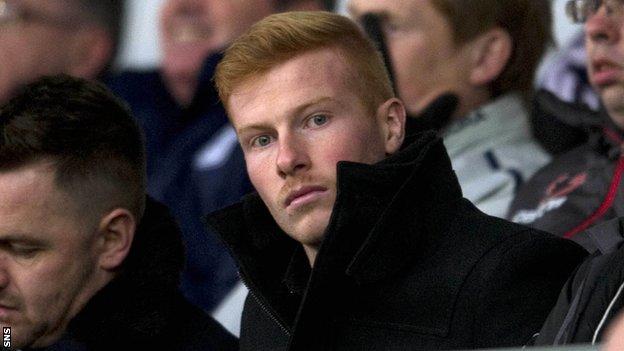 Newcastle United midfielder Conor Newton has completed his loan move to St Mirren until the end of the season.

Reserve goalkeeper Chris Smith extended his contract at St Mirren until the summer on Tuesday.

Now the Buddies have received international clearance for Newton and the Englishman could make his debut against Kilmarnock on Wednesday.

The 21-year-old joins Newcastle team-mate Paul Dummett in Paisley, the defender being on loan since August.

Newton, who signed a new one-year contract with Newcastle in the summer after a season out through injury, has yet to make his first-team debut for the English Premier League outfit.

But it appears that he is being viewed as a replacement for Kenny McLean should the Scotland Under-21 international be sold during January.

St Mirren manager Danny Lennon said: "He is hungry, he has got a fantastic education down at Newcastle, has a very good pedigree.

"He can play anywhere across the midfield and can fit in at right-back also.

"He's got lovely feet, a good passer of the ball and a bright type. He has fantastic legs and, if he has that appetite with the way we play and develop players at this football club, we will certainly improve him.

"And if all parties - St Mirren, Conor Newton and Newcastle United - gain something out of that then everybody's a winner."

and Lennon does not believe will hinder any proposed transfer.

"That depends how much these clubs are desperate to get him," explained Lennon, who hopes McLean will be back in action either on 19 January or face Celtic on the 27th.

"Kenny is a very good prospect and a wonderful talent. The operation Kenny has had is very minor and we are looking at Kenny only missing the Kilmarnock game.

"If he's not back for the Ross County game, we are certainly looking at the semi-final.

"It's very minor, the window is still going to be open and it depends how much these bigger clubs out there want a talent like that.

"We are by no means forced to sell Kenny McLean. By no means do we want to hold the player back.

"If it works well for all parties, ourselves, the buying club and, more importantly, Kenny McLean, then something can be done.

"If not, I'm more than happy to continue to help progress and develop Kenny McLean's fantastic early playing career."

Meanwhile, St Mirren general manager Brian Caldwell has been in touch with Major League Soccer about Sporting Kansas City forward Dom Dwyer, who had been on trial at St Mirren Park.

"Our hands are tied at this minute in time with that one and it isn't moving quick enough for us," admitted Lennon.

The Buddies are also hopeful of extending Dummett's loan from Newcastle until the end of the season.