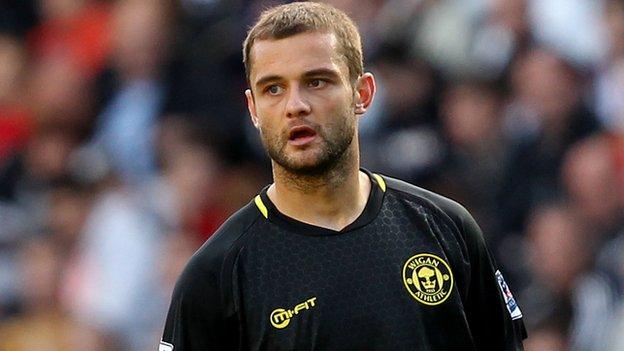 For such a diminutive man, Sean Maloney played a mighty role in the outcome of last season's Premier League when he scored Wigan's goal in their 1-0 win over Manchester United in April.

It not only helped keep Wigan up, it cost Sir Alex Ferguson's men the title.

But Wigan know any chance of a repeat on New Year's Day is a tall order.

"This will be another very hard game for us," Maloney told BBC West Midlands Sport. "We'll have to try and outwork them and see where that takes us."

United are now seven points clear at the top after winning seven times in their current eight-game unbeaten run.

But, having picked up just one point from their previous six games to slump into the bottom three, Wigan do at least now go into the United game at the DW Stadium (1 January, 15:00 GMT) back in form after Saturday's 3-0 victory at fellow strugglers Aston Villa, Maloney's old club.

"It was much needed," admits the 29-year-old former Celtic and Villa midfielder. "We knew if we got beat, that would mean Villa were six points ahead of us.

"Considering the baggage going into the game, to get an early goal was vital.

"And, having picked up just one point from our last six games, this was a pretty big result for us.

"We'd love to kick on now and at least take something from the United game.

"We played them earlier in the season, they were far superior and beat us 4-0. And we weren't great that day, particularly in the second half.

"If we're at our very best, we can give them a good game, particularly at our place, but we'll need to be at it."

After three successive Premier League seasons finishing in the bottom five under Roberto Martinez, Wigan are well used to a relegation scrap, last year's being the greatest escape when they reached the end of January in last place with just 15 points from their first 23 games.

They then lost only three times in their final 15, winning seven of their last nine, including the scalps of Liverpool (at Anfield), Manchester United, Arsenal (at the Emirates), Newcastle and all three sides who went down, to stay up in relative ease.

"We're going to need to do it again, by the looks of it," admitted Maloney. "But, with results, confidence builds."