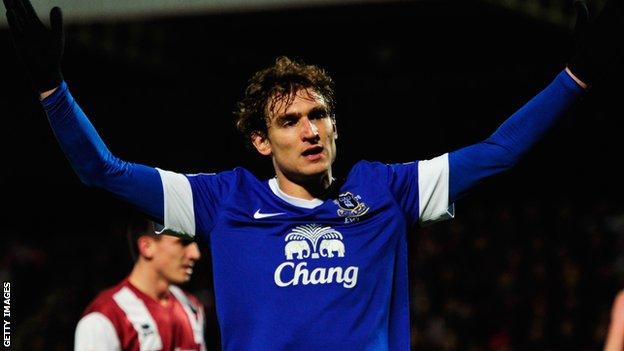 Everton produced a clinical performance to see off League Two Cheltenham and reach the fourth round of the FA Cup.

Leon Osman smashed in a third just after the break but Cheltenham quickly pulled one back as Russell Penn fired in at the near post.

Seamus Coleman's lofted finish made it 4-1 before Fellaini stabbed in from close range.

Everton will play either Sunderland or Bolton in the next round.

"I can't remember Everton missing a chance. Every opportunity they stuck away - it was clinical.

"Victor Anichebe really impressed and Everton were clinical in the extreme."

The scoreline was perhaps a little harsh on Cheltenham, who worked hard throughout but were ultimately undone by the quality of Everton's finishing.

Toffees boss David Moyes highlighted how much he wanted to progress in the competition by making just three changes to the side that beat Newcastle 2-1 in the Premier League last week, with defender Coleman, midfielder Bryan Oviedo and striker Victor Anichebe all starting.

But Cheltenham had the better of the opening 10 minutes as Kaid Mohamed passed for Darren Carter just inside the area but the former Birmingham midfielder scuffed his shot wide, before Jeff Goulding ran into a crowd of players when in a promising position.

Despite the home side's enterprising start, Everton took the lead in the 12th minute. Fellaini collected a pass from Oviedo before swinging a low shot towards goal that bounced back off the post and Jelavic reacted quickly to prod home the rebound.

It got even worse for Cheltenham nine minutes later when Everton added a second, this time from the penalty spot.

Alan Bennett was penalised by referee Kevin Friend for climbing over Fellaini in an attempt to head a cross away and Baines stepped up to confidently send the resulting penalty into the bottom-left corner.

A spell of Everton possession ensued as Cheltenham regrouped, but eventually the hosts again caused Everton problems. Billy Jones's free kick was headed just beyond his own goal by Jelavic, before Jermaine McGlashan lashed the ball over the bar from inside the area.

But, despite finishing the first half strongly, Cheltenham found themselves three goals down just four minutes after the restart. Baines picked out Osman inside the area and the midfielder skipped past the challenge of a home defender before smashing the ball beyond Scott Brown.

The home fans were finally given something to cheer about two minutes later when Mohamed slipped a pass for Penn to race on to inside the area and he stabbed the ball beyond Tim Howard at his near post.

Suddenly, Cheltenham fans sensed a possible fightback was on the cards.

But a fine finish by Coleman just before the hour put paid to those hopes. The impressive Anichebe spotted Coleman's run and played a ball for him to chase. He took one touch before lifting the ball over the onrushing Brown.

From then on, Everton's passage was never in doubt but there was still time for the visitors to add a fifth. Anichebe again provided the assist, crossing from the left, to leave Fellaini with the simple task of prodding in from close range.

Cheltenham manager Mark Yates said: "The scoreline was a little bit harsh. I thought we competed and worked really hard, and we had to just to stay in the game.

"Hopefully the players will realise they were in the game. They'll learn a lot from it and can be proud of their performance.

"It's great to see the quality that Everton showed and the respect they showed the FA Cup. It showed the quality of the club, the manager and the squad."

Everton manager David Moyes said: "We knew that it would be hard going because they have a good record at home but we got goals at important times. We got one early and then scored a penalty to settle it down. Cheltenham came back into it and it was probably not comfortable until we got the fourth.

"I wasn't overly pleased with how we played, we never really got control of the game. We were up against a spirited Cheltenham team who will have lifted themselves for the game and they have a great home record.