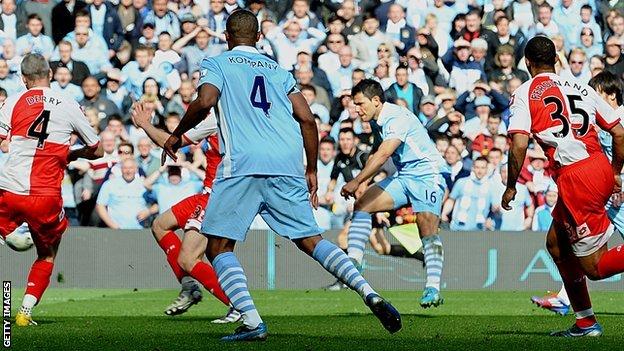 The year of 2012 was a remarkable one for sport and football had more than its fair share of drama, especially in the Premier League.

From Papiss Cisse's goal of the season against Chelsea to Sergio Aguero's stoppage-time strike that secured Manchester City the Premier League title in the most dramatic of circumstances, it was quite a year.

Thanks to Opta Sports, BBC Sport provides a breakdown of the year in numbers.

Manchester United scored the most goals with 90 and they also had the highest number of goals from the spot with nine. Manchester City were second with 78 and the Premier League champions had eight penalties.

Liverpool hit the woodwork 26 times, with Everton, Manchester United and Fulham on 24 while Robin van Persie's 14 times was the most by an individual player.

Tottenham Hotspur, with 14, scored the most goals from outside of the box with Manchester City and Newcastle in second on 12.

Manchester City had the most shots at goal with 541, while Liverpool were second with 518 attempts.

Manchester United scored the most own goals with six, and QPR found their own net on five occasions.

Manchester City defender Pablo Zabaleta, 27, and Sunderland winger James McClean, 23, both won the most tackles with 86 each.

Sunderland goalkeeper Simon Mignolet, 24, made the most saves with 140 with North East rival and Newcastle's Tim Krul, 24, in second with 123.

Swansea midfielder Angel Rangel, 30, made the most interceptions with 104 - just five more than second-placed Sandro, the 23-year-old Tottenham midfielder.

Manchester United midfielder Paul Scholes, 38, was the most accurate passer with 92.81% of his passes reaching the desired target with Swansea's Leon Britton, 30, coming just behind with 92.6%.

Goals as a substitute

Reading striker Pavel Pogrebnyak, 29, had the best shot conversion rate with 37.5% with Manchester United leading the team rankings with 19.07% with West Brom frontman Romelu Lukaku the most accurate with 71.88% on target.

Liverpool striker Luis Suarez, 25, attempted a 2012 high of 272 dribbles but completed just 100 while Newcastle midfielder Hatem Ben Arfa, 25. attempted 193 and completed the most with 100.

Wigan winger Jean Beausejour, 28, attempted the most crosses with 217 with West Ham's Matt Jarvis second with 212.

Manchester City's David Silva, 26, created the most chances with 108 and Chelsea's Juan Mata, 24, was second with 94.

Everton goalkeeper Tim Howard, 33, made the most appearances in 2012 with 41 with Sunderland winger McClean and Manchester City goalkeeper Joe Hart, 25, second on 40.

Everton midfielder Marouane Fellaini, 25, committed the most fouls with 96 with Norwich striker Grant Holt, 31, second on 87.

Everton winger Steven Pienaar, 30, was fouled 91 times, which was the highest, and Newcastle's Jonas Gutierrez, 29, was in second on 80.

Wigan striker Franco Di Santo, 23, was the most substituted player with Roberto Martinez hauling him off 24 times. Stoke's Matthew Etherington, 31, was second on 20 while Norwich's Grant Holt and Manchester City duo Carlos Tevez, 28. and Sergio Aguero, 24, were taken off 17 times.