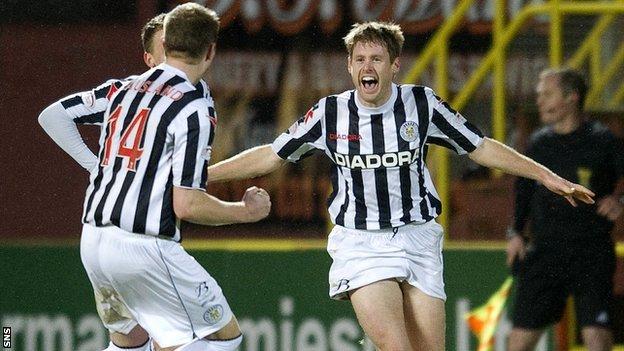 The Paisley outfit got the better of United in a seven-goal thriller in the final Scottish Premier League match of the year.

"A terrific three points for us," asserted Lennon.

"The key ingredient to our success is our work rate; not individually, as a team. It's fantastic."

Lennon's men have taken seven points out of nine in their last three matches and are now nearer the top six than they are to bottom club Dundee.

"It was a terrific game in a very difficult place to come to and I've got to give Dundee Untied a lot of credit," said Lennon.

"I felt we got off to a cracking start in the first 30 minutes and then they scored two goals through nothing.

"But we always believed, even at half-time, that the game was there for us and we got off to a terrific start, started the second half the way we began the first half and we.

"We took the game right to them and deservedly got ourselves into a two-goal lead."

That two-goal lead was reduced when Barry Douglas netted for the hosts but it proved only to be a consolation as David van Zanten's somewhat fortunate goal - a cross that meandered into the net - proved to be the winner.

"The next minute, the ball's in the net. What do us coaches know?"