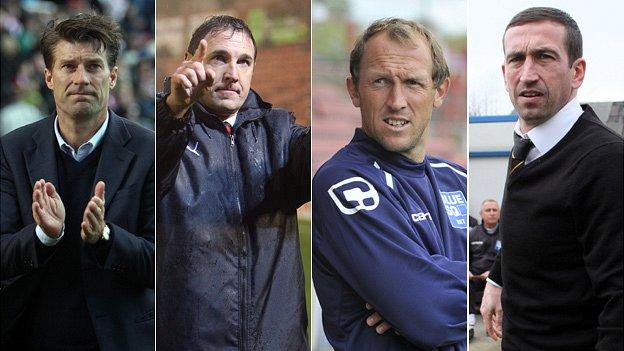 Swansea City - minus Brendan Rodgers - sit in the top half of the Premier League and one game from a Wembley final, while Cardiff City top the Championship. It has been a year of change in 2012.

Newport County have moved from the bottom of the Conference Premier to second and have already visited Wembley, while Wrexham are in third and also among those fighting to join the Football League.

All four Welsh clubs have everything to play for.

It may have felt like the end of the world for Swansea City fans at one point in May.

A year and a day after the Swans paraded through the streets following promotion to the Premier League, manager Rodgers left the Liberty Stadium.

Arsenal, Manchester City and Rodgers' new club, Liverpool, had been sent home pointless from south Wales as the Swans ended the 2011/12 campaign in a much-lauded 11th place.

But there would be no scouring for untapped managerial talent, no stop-gap appointment or loss of form.

Michael Laudrup - a fashionable manager who enjoyed a glamorous playing career with the likes of Barcelona - took the helm by mid-June.

But if end-of-the-world forecasts did not deliver enough fear, what about "second season syndrome"?

The loss of Wales midfielder Joe Allen - following Rodgers to Anfield - looked like another blow, but a 5-0 win at Queen's Park Rangers on opening day raised eyebrows, while back-to-back away wins at Newcastle and Arsenal put the Swans seventh as December rolled in.

Michu's double in that win at the Emirates was merely another day at the office for a player who having been signed for £2m defied the theory you get what you pay for.

The Spaniard's 13 goals since joining from Rayo Vallecano have made him a household name, while the signing of Pablo Hernandez from Champions League club Valencia perhaps underlines the Swans' move into new echelons.

These new stars from La Liga have gelled with club stalwarts such as Leon Britton, one of the constants in Swansea's rise from near-oblivion back to the top flight.

Five points better off than last season after 19 games, Laudrup's side have prospered in 2012. And now only Chelsea stand in the way of a place in the Capital One Cup final.

Following the Boxing Day draw at Reading, Laudrup said: "Playing the games with half of the starting XI being new players, I think it's absolutely fantastic that we have 25 points halfway through.

"We have one of the top scorers, we have positive goal difference, so I'm really happy."

One bookmaker offered odds of 5000/1 on 2012 Armageddon. At the end of the year, the same one marks Cardiff City at 1/3-on to reach the Premier League at the end of the season. Bookmaker confidence in a machine-like Bluebirds.

Malky Mackay's side entered 2012 fourth in the Championship and five points off top spot. A year, some play-off heartache and a domestic cup final later, they sit top of their league and clear by the same margin.

A canvas at City's training ground contains a quote from Michael Jordan which states how his failures ultimately led to success. It seems poignant during a year in which the Bluebirds' resolve has stiffened after tough experiences.

Minutes later dreams were dashed as Kenny Miller, Rudy Gestede and Anthony Gerrard missed spot-kicks on a day where Mackay's men were widely thought to have deserved more.

Only Gestede survived of the wayward three. Miller and Gerrard departed after play-off semi-final defeat to West Ham United.

But the duo's exit was small news during what was a red-hot summer at the club. A change of strip from blue to red, a marketing ploy, and the return of local boy Craig Bellamy to the club.

An ace in City's Championship pack, Bellamy was joined by a fleet of summer recruits.

For some supporters it was not enough. Football phone-ins were peppered with anger at the decision to change home colours. Some threatened to turn their back on the club which was once their world.

Those who did missed history.

A Craig Conway strike against Sheffield Wednesday secured a 10th consecutive home win at the start of the season, a new record for the club.

Away form offered a temporary concern for fans and media, but in truth there have been very few sticks with which to beat Mackay's side this season.

"It's been an interesting year," said Mackay. "Obviously I was delighted to get to the Carling Cup final, it was one of the proudest moments of our history and for me to walk out there with our team.

"As far as this season's concerned, I'm delighted with how the group has gelled and the spirit in the group up until December."

Festive period wins over high-flyers Crystal Palace and Leicester have given the Bluebirds a slight buffer at the top of the table going into 2013.

The omens, as well as the odds, are good as the side ending the year in that spot have been promoted in each of the last seven seasons.

If Cardiff City's clamour for Championship promotion seems like a battle, spare a thought for Wrexham.

With only one automatic promotion place on offer in the Conference, the Dragons' superb 98-point total was bettered in 2011/12 by Fleetwood who managed 103.

Andy Morrell's side can now frustratingly boast of the highest ever Conference points tally not to achieve promotion, after bowing out to Luton Town in the play-offs.

A costly April where the Robins went five games without a win may still haunt the club's supporters.

But Wrexham's world is still spinning. The loss of top scorer Jake Speight and the influential Nathaniel Percival-Knight have failed to quell ambition at the Racecourse.

In a league renowned for being volatile, consistency remains.

The acquisition of Brett Ormerod has added experience. The Robins moved within four points of the top when the 36-year-old hit the first and last in their 4-1 Boxing Day win over Telford United.

A place in the last 16 of the FA Trophy means Wembley and cup glory are also still on the agenda. But it is the sides vying for that solitary automatic promotion place that Morrell will be most concerned about in 2013.

From relegation-threatened strugglers in the Conference to serious promotion contenders. Throw in a Wembley final and it has been a year to remember for Newport County.

Much is owed to manager Justin Edinburgh, who inherited a side in 23rd place just a dozen games before 2012 began.

A Romone Rose strike in April's 1-0 win over Alfreton secured safety, but the club's centenary year will be best remembered for a Wembley occasion.

FA Trophy final defeat at the hands of York City may not be the stuff of legend, but Edinburgh's signal of intent was clear: success and not survival became the focus.

Ambitions grew as the club moved to ground-share with the city's rugby teams at Rodney Parade for the 2012/13 season.

A new chairman in Euromillions winner Les Scadding joined the club in August, but County have maintained their upward momentum without having to lean heavily on a benefactor.

The acquisition of Aaron O'Connor from Luton offered summer excitement and five consecutive wins at the start of the campaign brought enthusiastic crowds to County's new home.

O'Connor's goal against his old club put him top of the league scoring charts and moved Edinburgh's side top in mid-December. At the turn of the year they sit just a point behind Grimsby with a game in hand.

County look set to be one of the sides scrapping for the league's solitary automatic promotion place.

For them 2013 could be very special, as it could for their three Welsh counterparts.