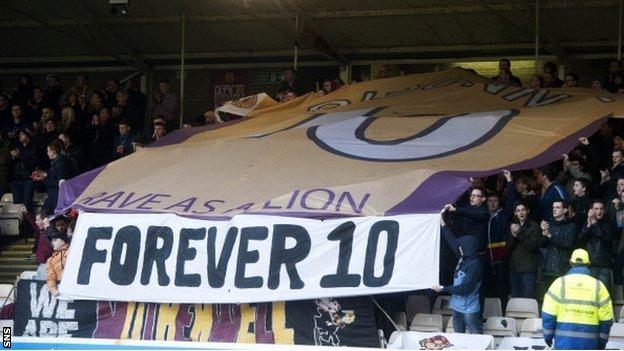 Kilmarnock manager Kenny Shiels felt his side's point at Motherwell was secondary to the tribute staged by the hosts to mark the fifth anniversary of their captain Phil O'Donnell's death.

The Ayrshire outfit were two goals to the good before Jamie Murphy and Henrik Ojamaa levelled the match at Fir Park.

"It's a day for Phil O'Donnell. I could feel the energy coming from the Motherwell people," said Shiels.

"It was really heart rending to see how they got behind such a great player."

And the Killie boss added: "We have great respect for that and it was good to be part of that."

O'Donnell collapsed in a match against Dundee United at Fir Park on 29 December 2007.

Of the match itself, Shiels said both teams deserved credit for their performances.

A first-half strike by Borja Perez was followed just after the hour by Paul Heffernan's fifth goal of the season before Motherwell staged their comeback.

"We were in control and when Motherwell scored it gave them momentum, they got a new energy from that," said Shiels.

"When Ojamaa made it 2-2 I thought we might get nothing, but we recovered and we did well to hold them out.

"Motherwell have presented a good game of football here today and we have done well to come away with something, even though we were in a winning position.

"You have to give credit to Motherwell. The entertainment level was very good from the teams.

"We're doing OK. We've got a point here, which I think is a good achievement. We've had a good December and a good 2012.

"It's been a great year for Kilmarnock, let's kick on and see if we can improve on that."