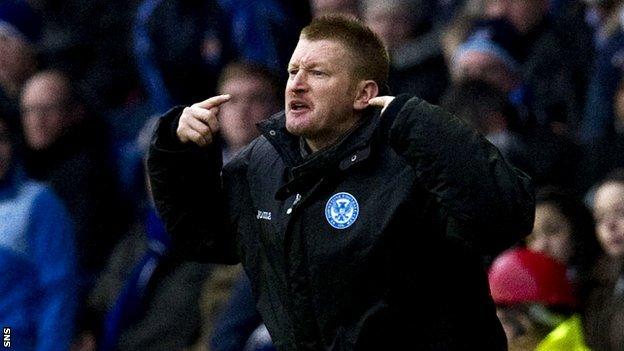 Saints have only recorded one win in 12 league matches, drawing with Inverness CT at McDiarmid Park on Saturday.

And Lomas insisted his side should have picked up more points from previous matches in Perth.

"Not today, I think today a draw was probably a fair result, but the three home games before that we should have had nine points, no doubt," he said.

"And that puts a total different complexion on the league."

While admitting that a draw was probably a fair result, Lomas said he felt it was another opportunity lost to amass points at home.

"I think probably being the home team, it's two points dropped," he admitted.

"Probably overall we cancelled each other out today.

"Positives? We've stopped Inverness scoring - we're the first team to do that in a long while, but, that being said, being the home team we'd be looking for the three points."

Lomas also admitted he was concerned by the slow start his side are making to matches, with Inverness having two good early chances.

"I keep telling the lads they can't give themselves an uphill task every time.

"It is concerning. We want to start the game on the front foot."

However, Lomas insisted the upcoming Tayside derby with Dundee at McDiarmid Park gives St Johnstone a chance to get back on winning form.

"We took great support down to Dundee earlier and got the result," he said.

"Just before the break it's important we get the three points.

"But we know Dundee are fighting for their lives.

"Hopefully it'll be a good atmosphere and we can give our fans something to cheer about."