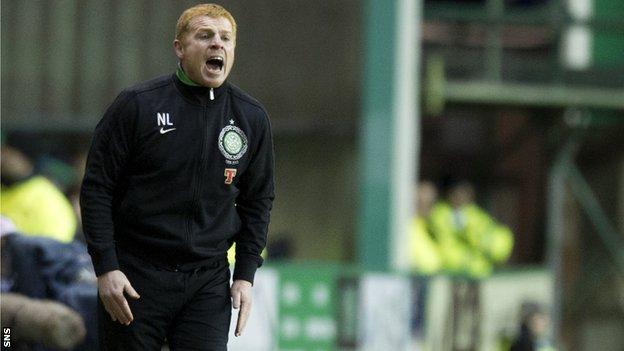 Celtic manager Neil Lennon admits he must shoulder some of the blame for his side's defeat to Hibernian at Easter Road.

Thomas Rogne, Kelvin Wilson and Efe Ambrose began the game as a back three.

"I blame myself for the initial set-up of the team but after 15 minutes we decided to change it," said Lennon.

"We thought the three would suit us, but that didn't seem to be the case. We looked a little bit flat the first 10-15 minutes and I don't know why."

He latched on to Paul Hanlon's pass in the ninth minute to net from a tight angle.

"It was a straight ball over the top and we should've dealt with it better," Lennon told BBC Scotland.

"I'd like to see the goal again to see if Griffiths was onside or not.

We looked powerful for the majority of the game

"I thought it was a great game and a great atmosphere.

"Congratulations Hibs, it's a great result for them. But I'm disappointed that our run's come to an end. I felt that the overall performance didn't merit that.

"I don't think we played badly at all and thought we deserved at least something out of the game."

Celtic had their best chances in the final quarter of the game, when Paddy McCourt, Victor Wanyama and Gary Hooper all went close.

"It was just our final ball or final finish," said Lennon.

"We looked powerful for the majority of the game and on another day we would've won it comfortably.

"In defeat you can take a lot of positives out of it although I don't like losing."