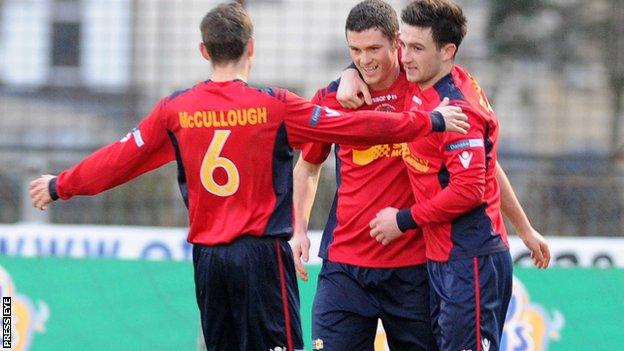 Lisburn Distillery stay rooted to the bottom of the Irish Premiership after blowing a three goal lead at Ballymena.

For the second game running, the Whites conceded an equalizing goal in stoppage time with Mark Surgenor's 93rd minute strike robbing them of three points.

Jordan Hughes' brace and a Gary Liggett goal had the visitors 3-0 ahead after 49 minutes before Gavin Taggart and David Cushley gave Ballymena hope.

Both sides were reduced to ten men before Ballymena's last gasp equalizer.

Distillery struck twice in the last eight minutes of the first half to give them a commanding two-goal lead at the interval.

Jordan Hughes beat Ballymena 'keeper Dwayne Nelson in the 37th minute after Aaron Stewart had failed to clear the ball and Liggett pounced on the mistake to put Hughes through for the opening goal.

Liggett helped himself to a second goal for the visitors just before the break, Scott Davidson the provider, as Liggett drilled the ball low into the net.

Hughes scored his second goal of the game after 49 minutes with a strong left-footed finish to put the visitors 3-0 up.

However Ballymena, who had lost their previous six league outings, started the fightback through Gavin Taggart's shot from outside the box on 52 minutes.

The same player was sent off after 66 minutes for a straight red card tackle on Ryan McCann and Distillery's Aaron Traynor was also dismissed three minutes later to leave both sides down to ten men.

David Cushley pulled another goal back for Ballymena in the 76th minute before Mark Surgenor scored the equalizer with the last kick of the game.

It was a sickening result for Tim McCann's Distillery, who also conceded a stoppage time equalizer to draw 3-3 with Donegal Celtic on Boxing Day.