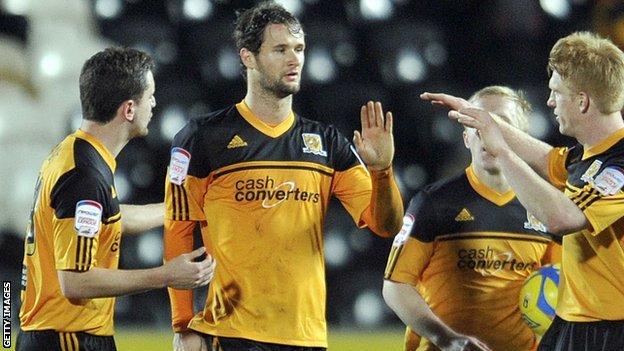 David Mooney had given League One side Orient the lead when he headed home his ninth goal of the season from Dean Cox's cross.

Orient looked to be heading into the fourth round before Proschwitz headed home Tom Cairney's cross.

The sides will meet again at Brisbane Road to decide who goes through.

Orient, who are 16th in League One, had chances to go ahead early on when Cox fired just wide from the edge of the box.

Hull, who are unbeaten in their last eight and are second in the Championship table, were struggling to create any real chances.

Their first fell to Alex Bruce just after the restart but he headed over. Paul McShane then forced a save from Jamie Jones with another header, before Orient opened the scoring.

A cross from Cox from the left was met by Mooney who headed home from six yards out.

With time running out Proschwitz, who cost £2.6m in the summer, rescued a replay for Steve Bruce's side.

It is only the second time the two sides have met in the FA Cup, the last meeting was back in 1963. Then the first match finished goalless before Orient won the replay 2-0 at Boothferry Park.

Hull manager Steve Bruce: "We can't be any worse playing down at Orient than we were playing out there today. It was absolutely awful. Were there any positives? Well, it did not rain.

"Only three players - the two central defenders and the goalkeeper - came anywhere near to producing what they can, and the rest did not.

"The one thing you can say is that a lot of the players need more games, as a lot haven't played recently. However, we had an experienced team out there on the pitch and they just did not perform at all. Will I play the same players in the replay? Possibly. It's a replay we could possibly do without, but we're still in the draw."

Orient manager Russell Slade: "We were positive but it was the manner in which we were disciplined and organised that pleased me. They have a very strong squad and we knew it was going to be a tough afternoon for us.

"It was probably one of our best performances of the season, particularly without the ball."