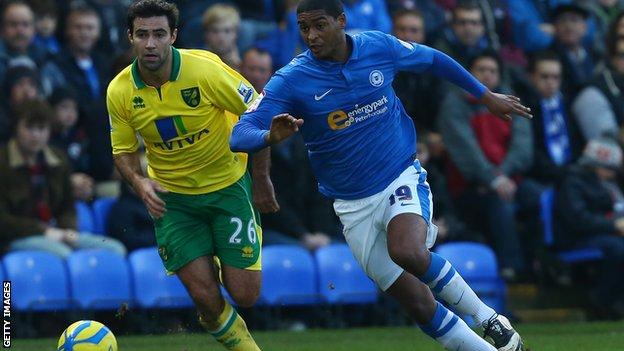 Norwich City eased into the FA Cup fourth round with a straightforward win against Championship strugglers Peterborough United.

Elliott Bennett put the Premier League side ahead before Simeon Jackson's delightful chip doubled the lead.

Robert Snodgrass completed the scoring with a simple effort to put the Canaries into the fourth round for only the fourth time in the past 10 years.

Posh rarely threatened and are now left to concentrate on beating relegation.

Posh have not advanced beyond the third round of the FA Cup since 2007-08 when they were a League Two club and made it to the fourth round, losing 3-0 at home to West Bromwich Albion

Norwich and Peterborough may only be 70 miles apart - close enough to constitute a derby in the outreaches of East Anglia - but the game lacked the fizz and fire of a seasoned local rivalry.

And priorities lie elsewhere for both of these teams, with survival taking precedence over an FA Cup run.

For Posh, the emphasis is on maintaining Championship status, while the Canaries, who made eight changes from the side that lost at West Ham on New Year's Day, are more concerned with securing a third consecutive season in the Premier League.

Norwich arrived at London Road off the back of a miserable Christmas period, having lost their last four games, but Peterborough failed to test the mettle of their top-flight visitors, instead allowing them to accumulate confidence with plenty of the ball.

Posh did threaten early on - good work from George Boyd freed Joe Newell whose shot deflected into the side netting.

But the Canaries were dangerous without being expansive and former Brighton winger Bennett, who had not started a game since October, was soon on the scoresheet, collecting the ball after a determined run from Snodgrass and poking home ahead of a trio of Posh defenders.

And the Canaries were as good as in the fourth round when Jackson outpaced the Posh backline to latch on to Fox's long ball and finish with a perfectly weighted chip over onrushing keeper Bobby Olejnik.

Norwich may have expected some urgency from Darren Ferguson's side in the second half, but it never came.

The Canaries struck the killer blow when the impressive Bennett dispossessed Grant McCann and laid on a simple chance for Snodgrass, who claimed the goal as his performance deserved by slotting into the net.

City keeper Declan Rudd had only Michael Bostwick's close-range effort to worry about as Chris Hughton's men eased through the final 20 minutes to make sure their 250th FA Cup match ended in victory.

Peterborough manager Darren Ferguson: "First and foremost, we've got our largest crowd of the season and I have to apologise to my own supporters for that performance because we're at home in a cup game which, for whatever reason, my players turned into a pre-season game.

"I'll have a meeting with them after this. I haven't spoken to them yet because sometimes you can say things you might end up regretting.

"It was a shocking performance. They'll expect me to pick them up again - either today or tomorrow, or Monday, and they're starting to take that for granted.

"In any game of football if your first proper tackle is after 65 minutes in a cup tie then you're going to lose."

Norwich manager Chris Hughton: "I think our approach to the game was good. Sometimes you get a feeling early on and I thought if we could score we would be OK.

"Robert Snodgrass is a good player. He's playing consistently and has been adding some goals and assists to his game and I thought he was part of an all-round good performance."