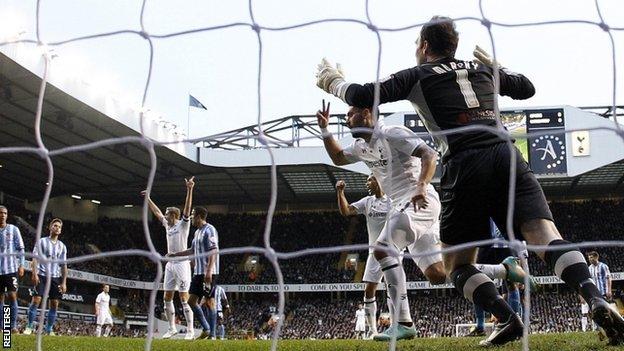 Clint Dempsey scored twice as Tottenham cruised into the fourth round of the FA Cup with victory over League One Coventry at White Hart Lane.

The United States international scored the opener early in the first half when he latched onto Gareth Bale's flick-on from a free-kick.

Bale added a second when he converted from close range after Dempsey's shot fell into in his path.

And Dempsey got his second before the break with a header at the far post.

Tottenham were dominant throughout and there never looked likely to be a repeat of the 1987 final, when Coventry stunned the north London side 3-2.

If Spurs' fortunes have remained pretty favourable since then, it has been a very different tale for Coventry, relegated from the top tier in 2001 having been there since 1967 before dropping into League One at the end of last season.

Third round joy for Spurs

The other difference between the clubs today and 26 years ago is the strength of squads.

Premier League and European money has allowed Spurs to put together a formidable group of players, so an ostensibly second-string team still featured internationals Bale, Dempsey and Emmanuel Adebayor.

It was Dempsey who broke the deadlock after sustained Spurs pressure in the opening 10 minutes, when he converted from close range after Bale had connected with Gylfi Sigurdsson's free-kick.

Welshman Bale, in rampant form, then beat five players before firing narrowly wide, and found the target after the half-hour mark when he tapped in Dempsey's deflected shot.

Coventry, finding it hard even to escape from their defensive third, conceded again before half-time, when Bale once more combined with Dempsey, who climbed highest to head in his team-mate's corner.

City manager Mark Robins, who won the Cup as a Manchester United player in 1990, lacked an attacking threat having lost top scorer David McGoldrick, who had scored 18 goals this season before his loan period ended.

New signing Leon Clarke was involved in the visitors' only decent chance of the half when he caused mild panic in the Spurs defence before the ball fell to midfielder James Bailey, whose shot was blocked.

Clarke also twice fired narrowly wide after the break and Brad Friedel made a brilliant save to prevent William Edjenguele's shot from creeping in, as City improved markedly.

Tottenham had a far quieter second half, with Bale producing a good save from Joe Murphy and firing a free-kick just past the Coventry upright, but Andre Villas-Boas's men could afford to relax after their first-half display.

"We know what we want to do in the league, we have won the FA Cup eight times before and we would like to go all the way this year.

"We didn't have to remind the players to be professional. They are really good. They put the opposition under pressure, they played with a high tempo and created chances.

"In the first half it was a different class. It was a great performance and we deserved the win."

"First half we gave them too much respect. We were frozen in the headlights. Eight minutes to concede the first one and you fear the worst; but we did much better in the second half.

"I can't be critical, though, because the opposition today were fantastic. When you come up against opposition like that you always need them to have an off day or to take liberties a little bit and not do what they normally do, but they didn't. They were at it right from minute one."