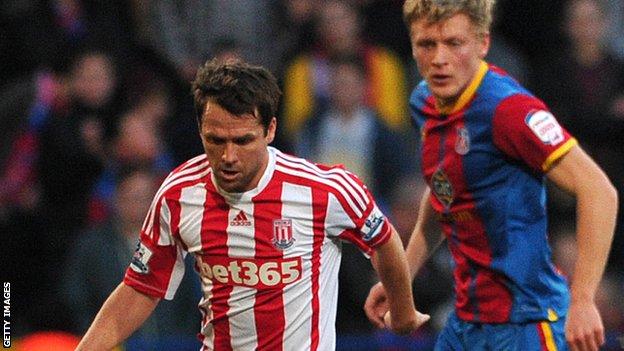 Michael Owen's first start in 14 months ended in frustration as Stoke were held by Crystal Palace in an FA Cup third round match of few chances.

Owen, 33, started with former England partner Peter Crouch in attack, but neither were able to threaten.

Palace, meanwhile, went close through Wilfried Zaha's powerful strike in the first half, before Yannick Bolasie fired over early in the second half.

After joining Stoke in September, Owen was given his first start by manager Tony Pulis at the ground where he made his first-team debut - and scored - for Liverpool back in 1997.

He was named alongside Crouch in attack, renewing a partnership that combined to score an impressive 16 goals in 16 games for England.

Michael Owen's start for Stoke was his first since Manchester United's 2-0 win against Otelul Galati in the Champions League on 2 November 2011.

But the pair did not really trouble the Crystal Palace defence throughout this encounter, with Owen coming off early in the second half having failed to manage a shot on target.

The only time the two did combine to create anything of note was in the 12th minute as Crouch somehow volleyed wide from half-a-yard following Owen's flick on.

After that chance it was the home side who created the better openings, and they looked the most likely to break the deadlock before half time.

First, Thomas Sorenson did well to keep out a rasping free kick from Andre Moritz before the Danish keeper produced a sprawling save to deny Zaha following a good run by the in-demand winger.

Crystal Palace picked up from where they had left off after the restart as Bolasie found space to turn and fire a shot that flew just wide of the Stoke goal, before Moritz failed to find the target from a good position.

Stoke were far from at their best and Pulis subsequently made two changes in quick succession as Owen was replaced by Charlie Adam before Cameron Jerome came on for Michael Kightly.

Jerome threatened almost immediately as he turned away from Damien Delaney to open up space for himself, but his half-volley was gathered by Crystal Palace keeper Lewis Price.

Chances were few after that, with Crystal Palace substitute Jason Banton hitting the side netting, while Adam's lobbed effort flew well wide.

Jerome's drilled effort was off target in stoppage time, meaning the tie will be decided in a replay at the Britannia Stadium.

Crystal Palace manager Ian Holloway: "I wanted to win or lose, basically, and wasn't bothered which as long as we had a good performance.

"But the way the game went I'm glad we didn't lose because I don't think my boys deserved to lose.

"It's looking like my team now, and if that's after eight weeks I'm looking forward to the rest of my four years in charge."

Stoke manager Tony Pulis: "When the draw was made, we knew this would be a very tough fixture.

"They played really well. They've got some dangerous players in their team and we are pleased with the result. They are a good side, Ian Holloway's got them well-motivated and it was always going to be difficult.

"I was bringing on players like Kenwyne Jones, Cameron Jerome and Charlie Adam to try to win the game. But both teams are in the draw so that's something to look forward to."