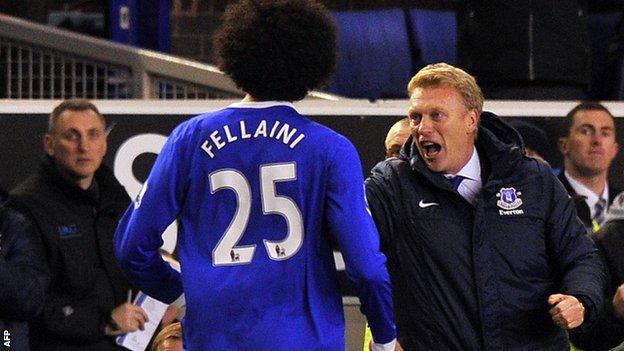 Everton do not intend to sell any of their stars during the January transfer window, says boss David Moyes.

Hinting that money was tight, he told BBC Radio 5 live that meant he did not expect any major signings either.

However, he said he could bring in a couple of players on loan or possibly sign a free agent.

Moyes was also dismissive of fresh speculation concerning left-back Leighton Baines, who has been linked with Chelsea.

Moyes brought in striker Nikica Jelavic and midfielders Darron Gibson and Steven Pienaar during last January's transfer window, but doubts whether this winter's business will be anywhere near as brisk.

The Scot explained: "Last year, we sold (Diniyar) Bilyaletdinov for £5.5m back to Russia and that gave us the opportunity to go and buy.

"We brought in Steven Pienaar on loan from Spurs, we bought Jelavic from Rangers for £5m and Darron Gibson from Man Utd for £500,000. We spent the money we got in. That is the way we have tended to work."

There has been much speculation surrounding the future of attacking midfielder Marouane Fellaini, who has scored eight goals this season.

But Moyes said: "My intention is not to sell anyone this January."

Asked about the chances of signing Spain striker David Villa from Barcelona, Moyes added: "If he was loanable and he wanted to join Everton, we'd be more than happy to have him."