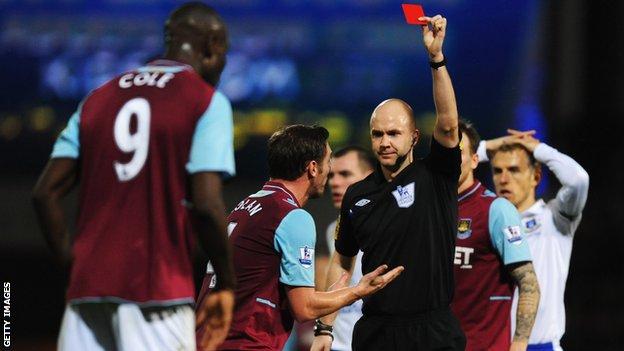 Everton and West Ham have successfully persuaded the Football Association to overturn the red cards given to Darron Gibson and Carlton Cole last week.

Midfielder Gibson was dismissed by referee Anthony Taylor for a challenge on West Ham's Mark Noble in Everton's 2-1 win at Upton Park on 22 December.

Their three-match suspensions have been withdrawn immediately. Written reasons will be provided at a later date.

And Hammers striker Cole, sent off in the same game, is free to play in West Ham's game at Reading on 29 December.

Gibson will be available for Everton's home game with Chelsea the next day.

A statement on the FA website said: "The FA can confirm that red cards shown to West Ham United's Carlton Cole and Everton's Darron Gibson have been rescinded.

"Their three-match suspensions have been withdrawn immediately.

"Written reasons will be provided at a later date."

Cole was sent off for a challenge on Everton left-back Leighton Baines.

Cole wrote on Twitter afterwards: "Great news that the red card got overturned, @FA done a great job. Well done! Time to make all the aggro worth it on Saturday if selected!"

Everton manager David Moyes and West Ham counterpart Sam Allardyce made it clear after last week's game that they were unhappy with the dismissals.

Moyes said: "I didn't think either were red cards and we'll appeal. I'll have a word with Sam about appealing as well."

And Allardyce added: "It had a massive effect but we will appeal immediately."