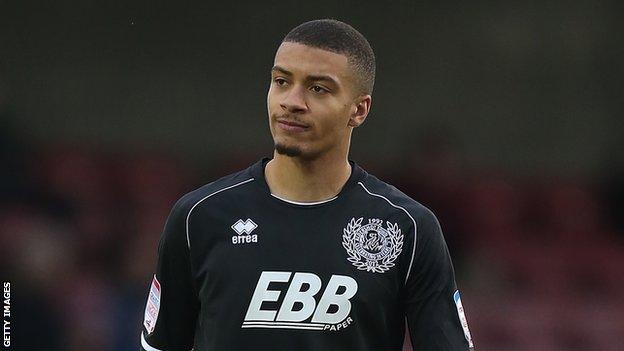 Aldershot Town defender Michael Hector hopes he will be able to extend his loan stay with the League Two club.

The 20-year-old, who is on loan from Reading until 1 January, has scored once in five appearances for the Shots.

It was strange for me coming here and seeing the position that we were in. We should push up the league

He told BBC Surrey: "I spoke to the manager [Brian McDermott] when I went back to Reading.

"He's seen the feedback from the scouts and is happy with my performances. I know [Shots boss] Dean Holdsworth wants me to stay, so it is positive."

Hector continued: "If I am on the pitch I am happy. There is a great bunch of lads here and I am really enjoying it."

Aldershot are now three points clear of the relegation zone following a 2-2 draw at home to bottom side Bristol Rovers on Boxing Day.

"We shot ourselves in the foot a bit with some of our defending," Hector said.

"We should have really seen the game out but we need to kick on.

"The players in the dressing room are similar players to what I played against last season [with Barnet] and they were pushing for the play-offs.

"It was strange for me coming here and seeing the position that we were in.

"I know the quality [of players] in training so we should push up the league. Hopefully we can."