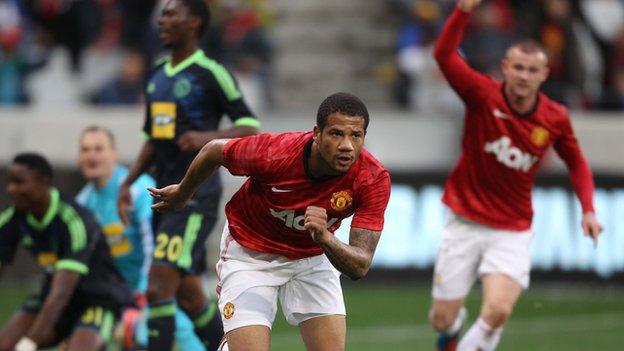 Manchester United have sent £7.4m forward Bebe out on loan to Rio Ave.

Bebe joined from Portuguese club Guimaraes in 2010 and United boss Sir Alex Ferguson admitted he was the first player he had signed without watching.

Having struggled to make an impact Bebe, 22, joined Turkish side Besiktas on a season-long loan in June 2011.

He made just a handful of appearances for Besiktas before suffering a knee injury on Portugal Under-21 duty that sidelined him for most of last season.

In 2009 Bebe was a resident at the Casa do Gaiato shelter in Portugal, an organisation which helps homeless people and uses football as a way of getting them off the streets

But the Portuguese insists he is fully fit and raring to go at top-flight side Rio Ave.

"I'll give it everything while I'm here and try to help the team to continue occupying the places that they have been in the table," said Bebe.

"Obviously something went wrong in the last phase of my career, I had a serious injury which thankfully I have fully recovered well from.

"I'm fine physically - I was always training and playing. It's good to come here and I want to show what I can do."

In May it emerged that police in Portugal were planning to question Manchester United as part of their investigations into Bebe's transfer.

An anti-corruption unit is examining the transfer to establish how an estimated £3m of the fee was purportedly paid to Jorge Mendes's Gestifute football agency.