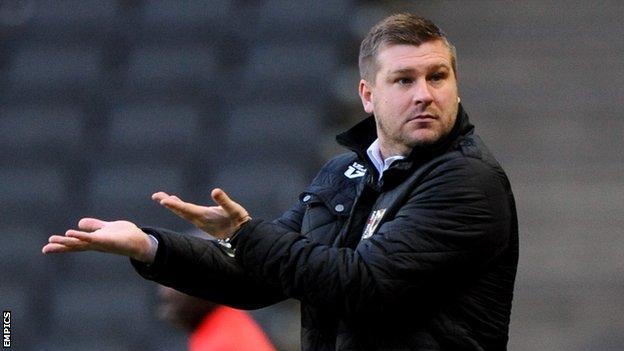 Robinson saw his promotion-chasing side drop to sixth in League One, five points off second-placed Tranmere.

And he told BBC Three Counties Radio the performance was unacceptable.

Top of League One

"If players want to neglect the shirt like that, they'll find themselves very quickly out of the team and out of the football club," he said.

"It was shambolic defending. The defending in the first half was as bad as any in the two years I've been here.

"We were dropping too deep. We were talking about the distance between the defenders and our two midfield players and there was almost 30 yards at stages.

"And then to back off and let them turn and shoot in your box - it's kamikaze stuff really. They've got to put that right very quickly.

Striker Patrick Bamford limped off with a hamstring injury late on in the game to add to Robinson's injury concerns.

Forward Luke Chadwick is out for two months with knee damage, while midfielder Stephen Gleeson's expected 10-week absence with a broken foot saw a reshuffle in the Dons line-up.

When asked about the performance of winger Angelo Balanta, Robinson replied: "You can pick on Angelo, but I thought there were other players worse than him who didn't deserve to wear the shirt. And they won't if they continue.

"To lose Patrick is a big loss to us. With Jon Otsemobor, Gary MacKenzie, Stephen Gleeson and Luke Chadwick out, people will say you can't use that as an excuse.

"But I'm sure when you look at the Premier League if Robin van Persie and Wayne Rooney were out of the Manchester United side they would be depleted.

"But there are certain players that need to stand up and be counted, and if they can't do that I will need to make changes in January.

"They've had a bad day, so you have to give them the benefit of the doubt. They need to make sure it doesn't happen again."