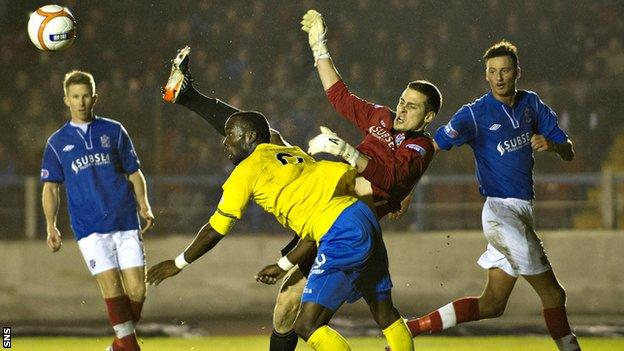 Scottish Football League chief executive David Longmuir has described the latest round of talks on league reconstruction as "very positive".

Longmuir added that "progress has been made" after a working party meeting with Scottish Premier League officials.

Each body has drawn up significantly different proposals to alter the existing league format.

Longmuir stressed that no structure had been agreed but said that negotiations would resume on 8 January.

"The fact we are meeting again so soon shows the parties are progressing well with plans," said Longmuir after the Hampden gathering.

"A league structure has not been agreed on yet but all parties [including the Scottish FA's professional game board, who are facilitating the negotiations] believe that is not the key.

"We feel the key issues are distribution of wealth, play-offs, governance and long-term proposals for a pyramid system."

The SPL favours two top leagues of 12, while the SFL has proposed a 16-team top flight, with divisions of 10 and 16 below it.

Despite the differing blueprints, SFA chief executive Stewart Regan last month said he was encouraged by the common ground secured in prior talks with both bodies.

The 30 SFL clubs unanimously backed plans for a 16-10-16 structure, but SPL chief executive Neil Doncaster was quick to dismiss a 16-team top division as "unworkable", citing the drop in fixtures as detrimental.

Doncaster said the 12 top-flight clubs had all backed plans to expand its own membership, with a new extended play-off system.

It is understood the two-division set-up being explored by the SPL would split after two rounds of fixtures in which teams had met home and away.

The top eight clubs would then meet a further twice home and away, while the bottom four clubs would play against the top four of the new lower division of 12, made up of teams invited from the SFL.

These eight clubs would meet twice, home and away, with the bottom four clubs being relegated at the end of the season.

The bottom eight clubs in the lower division would also play-off against one another.

The concept of an "SPL2" has long been mooted, with SFL clubs voting 22 to eight against further talks on teams joining a new second tier in 2007.

SPL clubs could not agree on plans for a two-tier system featuring a top flight of 10 last year.

Longmuir added that he believed there would be "more clarity on the way ahead for Scottish football" after the 8 January meeting.