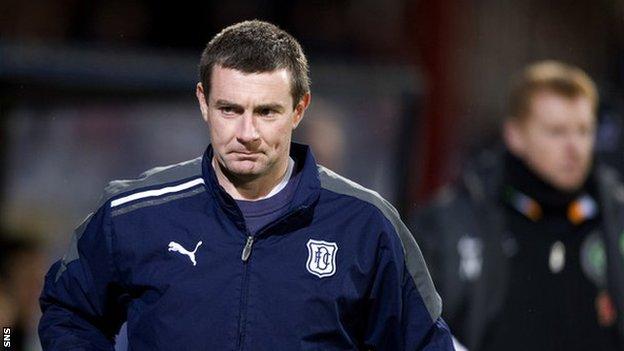 Barry Smith hopes his Dundee players will take heart from their second-half display in the 2-0 defeat by Celtic as they seek to avoid relegation.

"We are disappointed at getting beaten but there are a lot of positives to take from the second half," said Smith.

"We have limited Celtic to not a lot of chances. We've got to take the belief from that into the game against Aberdeen on Saturday.

"It's now about pushing on and starting to pick up points."

Ross County's 1-0 win over Hibernian at Easter Road earlier on Boxing Day left bottom side Dundee nine points behind the Dingwall club but with two games in hand.

Having now played half of their 38 Scottish Premier League games, the defeat by Celtic leaves them with a stern challenge to avoid dropping into the First Division.

"We are seeing a progression. Against Celtic at Parkhead [] we didn't create any chances, whereas we have gone toe to toe with them for a good part of the second half," Smith told BBC Radio Scotland.

"In the next two games [at home to Aberdeen and away to St Johnstone] we will be looking to get as many points as possible.

"It is difficult in this league because there is not much between the teams but we know now we are capable of playing against these teams."

Celtic's first goal was a superb overhead kick by the quick-witted Georgios Samaras.

After the break, despite a series of chances for the home side - notably by Colin Nish - that were thwarted by Fraser Forster, it was Celtic who scored again.

Gary Hooper seized on Declan Gallagher's hesitancy in dealing with a long ball, and showed excellent control and vision to lob Rab Douglas.

"We asked them at half-time to be a bit braver on the ball and it showed in spells," continued Smith.

"We looked like the team that was going to score. Their keeper made two great saves - world-class saves for me - that stopped us from getting level.

"The pleasing thing for us is that we created the chances.

"They were two preventable goals but we have two young boys at centre-back [Gallagher and Kyle Benedictus] and they will get the chance to learn at this club.

"They are making wee mistakes but there are positives about the defending as well."