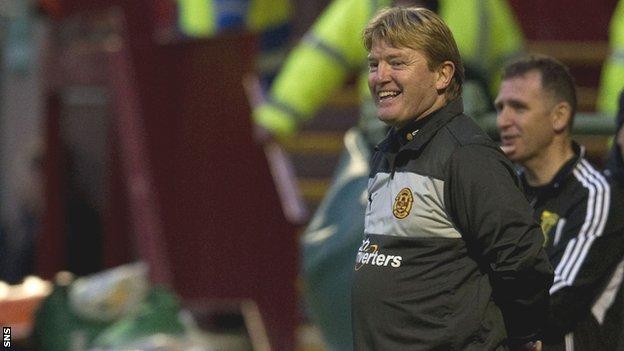 Motherwell manager Stuart McCall expects to lose a player during the January transfer window - but insists he does not know which one as yet.

But McCall said: "They might have come looking at those guys, but scouts will have gone away with five or six names.

"I expect to lose one, but no more than one, during January."

Murphy has been linked with Rangers once his contract at Fir Park runs out in the summer, while reports have suggested a bid has been made by Sheffield United.

However, McCall thinks the 21-year-old Estonia international would be better advised to continue his development in the Scottish Premier League.

"That is probably as sharp as he's been this season," said the Well manager.

"I know he has been linked with the Polish club, but he has 18 months left of his contract with us and I have told him that, if he keeps playing like that, clubs at the highest level in England will be looking at him.

"But there's no doubt players will move on."

McCall revealed that it was a change in tactics rather than injuries that led to the omission of Chris Humphrey and Stevie Hammell from the starting line-up and it now left him with a "dilemma" for future matches.

"I left Chris out for a little rest," said the manager, who also pointed out that defender Simon Ramsden had been taken off at half-time because of a calf strain.

"I wanted to play three up front against Aberdeen to put pressure on their three centre-halfs and it worked for us.

"Aberdeen started the better, but once we got ahead, we played some really good football.

"We can't get too carried away with ourselves, but we've been in good form and even played well while losing to St Mirren on Saturday."