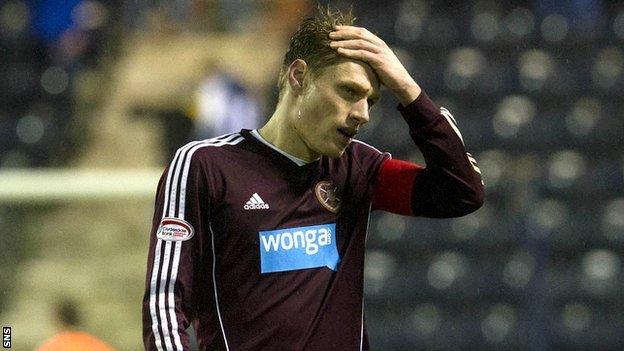 Manager John McGlynn felt Hearts did not get the reward for their endeavours following the 1-0 defeat at Rugby Park.

Liam Kelly's first-half penalty gave Kilmarnock victory, with Hearts unable to convert a series of chances after the break.

"It's disappointing to go away with nothing, having put in so much," McGlynn told BBC Scotland

"We feel we put an awful lot into that game and got nothing out of it. We totally dominated the second half."

"We just couldn't get the ball in the back of the net," said McGlynn.

"Cammy Bell's had a terrific save from Andrew Driver but we had lots of balls in the box, it just didn't fall for us in front of goal."

Hearts' best chance fell to Callum Paterson, with the substitute hitting the ball too early and being denied by Bell.

"He did really well to win the ball just over the halfway line and he's through one-on-one," added McGlynn.

"I felt he could've take it in a bit closer. Hopefully he can learn from that, he's a young lad."