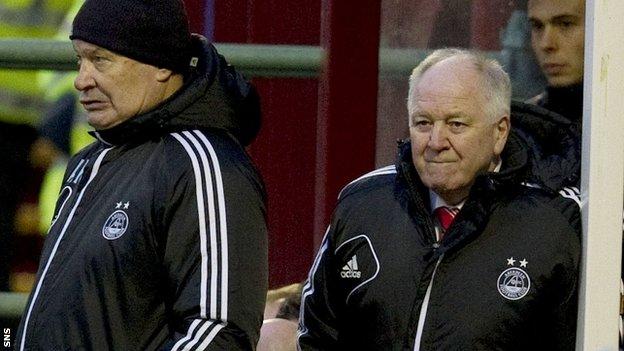 Craig Brown has told his players that a 4-1 defeat is "unacceptable" for a club like Aberdeen and they must "atone" against Dundee at the weekend.

But the Dons boss did not think the margin of defeat by Motherwell reflected the game at Fir Park.

"On the day, Motherwell were marginally the better team," he said.

"To lose by that margin is not acceptable. My Christmas message is to take that result with humility and be determined to atone for it at Dundee."

In-form Aberdeen striker Niall McGinn missed a good chance to open the scoring and Josh Magennis missed the target with a curling shot before Tom Hateley headed Well into a ninth-minute lead.

"We had two good chances right away and I always say that the first goal in Scottish Premier League games are definitely quite critical," said the Dons manager, whose side have now suffered four defeats in their last five league outings.

"We missed a lot of chances, but Motherwell did too.

"We did not do ourselves justice today after a very good performance at the weekend.

"But, although I would not say we were unlucky, we were not outplayed."

However, he pointed out that his own room for manoeuvre in response had been limited.

"We are not in a position to freshen the team because of the injury list," said Brown, who stated that he had withdrawn influential captain Russell Anderson before the end of the game to save the former Scotland defender for the match at Dens Park.

"It wasn't an injury. We have two games in a short space of time and he is unlikely to recover.

"Sometimes you have to save enthusiastic players like that from themselves.

"And, because of his past injury problems, we have to protect him.

"Andrew Considine came on, but he missed Saturday's game through illness and has lost half a stone in weight."