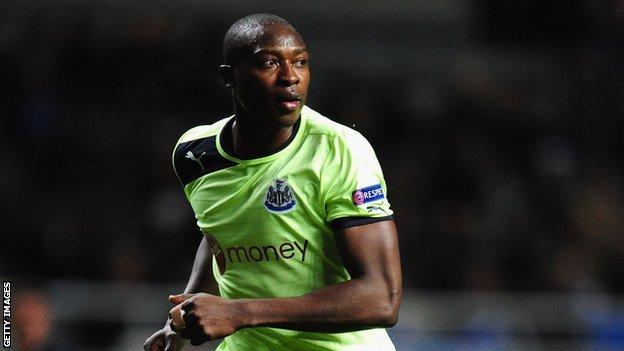 Nigeria coach Stephen Keshi has admitted he could have problems ensuring Newcastle release Shola Ameobi for the Africa Cup of Nations finals.

Magpies boss Alan Pardew insists his striker will not go to South Africa.

"Apparently, there is a clause in his contract that he would not dump the team for the Nations Cup," Keshi said.

Meanwhile the Nigeria Football Federation (NFF) says it will report Millwall to Fifa if they do not release defender Danny Shittu for the event.

Both players were named in an initial squad of 32 for the finals, which take place between 19 January and 10 February.

A player who has been called up by his association for one of its representative teams is, unless otherwise agreed by the relevant association, not entitled to play for the club with which he is registered during the period for which he has been released or should have been released pursuant to the provisions of this annexe.

This restriction on playing for the club shall, moreover, be prolonged by five days in the event that the player, for whatsoever reason, did not wish to or was unable to comply with the call-up.

However Keshi has not given up all hope of Ameobi being part of his squad.

"I spoke with Shola Ameobi and he said his coach did not speak with him even before going to the press," he said.

"But Shola has said he would speak with the coach after their game against Manchester United and get back to me.

"I must confess that with this latest revelation from Shola we are in a tight corner because the club is uncertain of the future of Demba Ba."

Meanwhile, the NFF has reacted to Millwall boss Kenny Jackett's comments that he expects Shittu to turn down Nigeria.

"These clubs are not only disrespecting Nigeria but Fifa and [African governing body] Caf as well," board member Chris Green told BBC Sport.

"The rules are clear on international games approved by Fifa so we consider these comments as not only ridiculous but totally disrespectful."

Green has made it clear that the NFF will apply for the full weight of Fifa sanctions on clubs who do not release players.

"We know the rules. Fifa has made it clear that these clubs will not be able to use these players for the duration of the Nations Cup plus an additional five days," he added.

"We will further push for additional sanctions - we understand these clubs employ our players but they are also international footballers.

"Rules are rules. Newcastle and Millwall must understand the basics [of] why they exist."