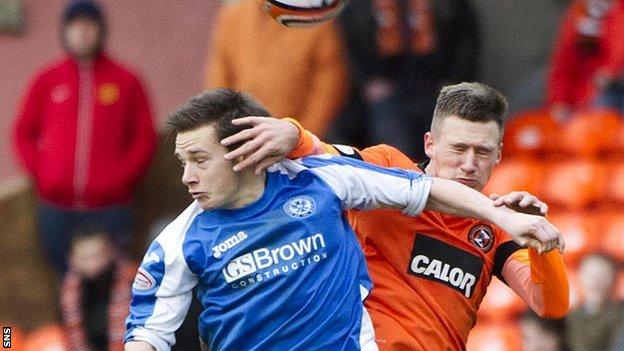 The Perth side came from behind to earn a draw in the Tayside derby at Tannadice.

"From a slightly critical point of view we have got to look at our conversion rate," Lomas told BBC Scotland.

"We're creating a lot of chances but our conversion rate is quite low. It's probably the main reason we've drawn so many games this year."

"The last three home games we should be sitting with nine points if we take our chances," said Lomas.

"That being said, the good thing is we're creating chances and we've just got to persevere with our convictions and keep getting in there.

"I'd be more worried if lads weren't getting in there to miss chances."

Gavin Gunning put Dundee United ahead early in the match.

But St Johnstone got their equaliser two minutes after the restart when Peter Pawlett's cross came off home defender Brian McLean for an own goal.

"I thought, second half, we were the most progressive team and probably should've got the victory.

"I was happy with the performance and nobody would've complained if we had gone down the road with three points."