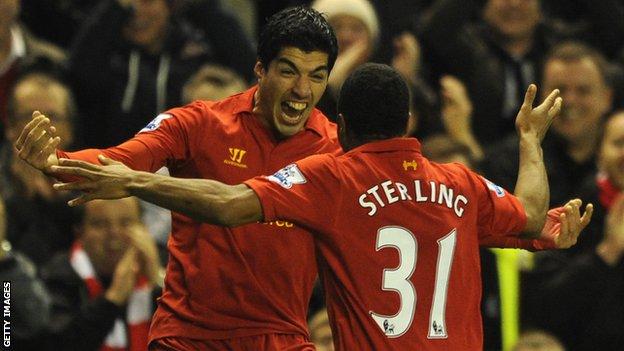 Luis Suarez took his Premier League tally to 15 goals for the season by scoring twice to help Liverpool ease to victory against Sunderland.

Suarez doubled Liverpool's advantage soon after, racing into the area before stabbing the ball home.

The Uruguayan then made it 3-0 early in the second half with a close-range strike from Steven Gerrard's pass.

"Liverpool were at it from the go and they took their chances. The second half was an exhibition and they are starting to look a good team. They still need to bring in some players though. The system that Liverpool try to play gives the players confidence. Some will not be good enough and they look better players than they are. Glen Johnson is excellent, Steven Gerrard is coming back to his best and they have Luis Suarez."

The win means Liverpool have recorded back-to-back league victories for the second time this season and moves them up to eighth in the table.

For Sunderland it was their second successive defeat following the 2-1 loss to Tottenham at the weekend and they remain 14th.

Liverpool's attacking display would have impressed Sturridge, who completed the formalities of his move from Chelsea in the hours before kick-off.

Despite a confident start by Sunderland, it was the home side who were the first to threaten in the 11th minute when Suarez was fouled just outside the area and Stewart Downing curled the resulting free-kick towards the near post, but keeper Simon Mignolet did well to push the ball behind for a corner.

Liverpool's opening goal came eight minutes later. Suarez brought a Gerrard pass under control before expertly lofting the ball over the defence to release Sterling and the young England winger showed great composure to draw out Mignolet before lobbing the ball into the net.

The Sunderland defence were struggling to deal with Liverpool's pacey attacks and the hosts took full advantage by adding a second in the 26th minute.

Gerrard knocked the ball forward for Suarez to chase down the right and, though the Uruguayan was fouled by Carlos Cuellar, he stayed on his feet to charge towards goal and power a neat finish beyond Mignolet.

Suarez at the double

Despite the two-goal deficit, Sunderland still carried a threat when they got forward and they had a great chance to pull a goal back when Adam Johnson's deep cross found Matthew Kilgallon inside the area, but the defender's half volley was superbly denied by Pepe Reina.

Sterling and Suarez continued to combine well and cause Sunderland problems after the break, and a fine move involving the pair should have brought a third goal five minutes into the second half.

Suarez smartly clipped a Gerrard pass forward to send Sterling clear again, but this time the 18-year-old could not match the composure he showed for his goal as he fizzed a shot well wide.

Liverpool did add a third two minutes later when Gerrard delivered a pass from 60 yards for Suarez to collect and shoot beyond Mignolet from close range.

From then on, Liverpool were firmly in control and had plenty of chances to add to their advantage.

A Gerrard shot deflected off Glen Johnson towards goal but Mignolet did well to push the ball over the bar, before the Sunderland keeper raced out to deny Suarez his hat-trick.

Both Johnson and substitute Joe Allen had efforts ruled out for offside, but with the damage already done, Liverpool comfortably saw out the remainder of the game to ensure 2013 got off to the ideal start.

Liverpool manager Brendan Rodgers said: "The star was our team. Luis Suarez got two goals and Raheem Sterling got one but that is their job and the team was brilliant.

"It was the fourth game in a short period of time and their work rate and intensity was incredible. I am very, very happy, it is another win for us and we can look forward to the next game.

"Luis has been absolutely fantastic. He moves well, he is a real threat and he is a real pleasure to work with. He is that Lionel Messi type of player in that he gets kicked all over the place but he gets up and he produces."

Sunderland manager Martin O'Neill said: "At half time in the game we felt as if we could have got a goal and we perhaps created the better chances, but we were unable to take them.

"They got the third goal and that was important. If we scored before then it would have got us back into the game but at 3-0, Liverpool are very strong.

"With the Christmas period we have had, if you had said we would get six points from four games against the teams we have played, I probably would have accepted that. It is up to us now, we have some points on board but it is still a tough old time."