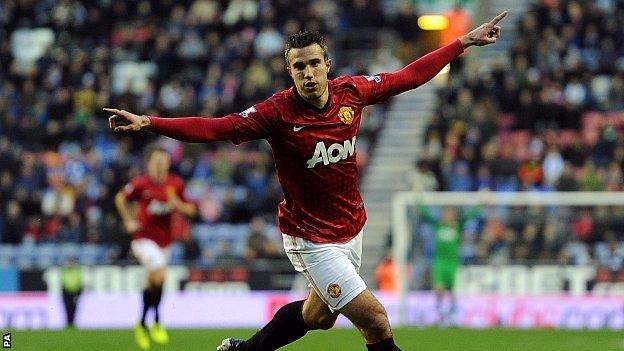 The Mexican striker side-footed the opener after Ali Al Habsi had parried Patrice Evra's shot into his path.

United went 2-0 up when Van Persie turned Ivan Ramis and curled a sublime shot into the far corner.

United's eighth win in nine league games maintained their grip on top spot in the table at the end of a busy Christmas schedule and provided a fitting way for manager Sir Alex Ferguson to celebrate turning 71 on New Year's Eve.

Wigan, in contrast, appear destined for their annual relegation fight after sliding to 17th place, just one point above the drop zone.

A lively start from United showed their determination to avoid a repeat of last April, when a shock 1-0 defeat at the DW Stadium contributed to them surrendering an eight-point lead to Manchester City in the title race and set Wigan on the road to safety.

The recalled Hernandez was a lively spearhead to United's attack and, after firing his first chance straight at Al Habsi from a narrow angle, he collected a Ryan Giggs pass and drilled into the net, only to be correctly denied by the linesman's flag.

"It was every bit as comfortable as the scoreline would suggest. Sir Alex Ferguson played 4-4-2 and the two strikers scored two and could have had hat-tricks. United won by four but you could have picked any number such was their superiority over Wigan."

Another sublime delivery from Giggs almost provided Hernandez with a tap-in, but the ball was expertly whipped away from his toes by Maynor Figueroa.

With United in the ascendancy, Al Habsi was the busiest man on the field, saving a free-kick from Van Persie and a deflected drive from Rafael.

But when a corner from the right was never properly cleared, United's pressure finally bore fruit.

Evra picked up Jonny Evans's pass and unleashed a powerful drive, which was pushed one-handed by Al Habsi into the path of Hernandez, who side-footed first time into the roof of the net.

Al Habsi could do nothing to prevent United's second goal, which was down to the individual brilliance of Van Persie.

Found by Hernandez inside the area, the former Arsenal striker left Ramis on the floor with a sharp turn and whipped a right-footed shot into the net.

United almost extended their lead shortly after the restart as Van Persie played Hernandez into space but the striker fired wastefully wide.

Wigan thought they had secured a lifeline when Arouna Kone turned in Franco Di Santo's low cross, but the Ivory Coast striker was ruled to have strayed a fraction offside.

United reacted to the scare with characteristic ruthlessness as Hernandez secured the points with his team's third goal. Van Persie's free-kick rebounded off the wall into the Mexican's path and was expertly drilled past Al Habsi.

A comfortable afternoon for United was complete when Van Persie capitalised on a horrible mix-up in the home side's defence to score his 19th goal of the season.

Jean Beausejour ran into his team-mate Emmerson Boyce and presented the ball to substitute Welbeck, whose square pass was easily turned in by the prolific Dutchman.