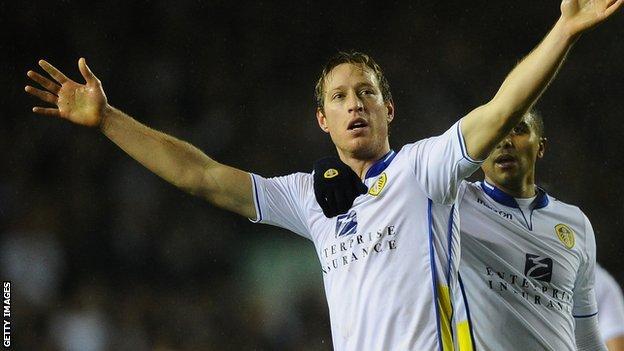 Luciano Becchio scored from the penalty spot as Leeds edged past Bolton in a poor Championship game at Elland Road.

Chris Eagles clipped the outside of the post early on for Bolton and the winger then forced Leeds goalkeeper Paddy Kenny into a good save from distance.

Ross McCormack was brought down in the box in the second half by Tyrone Mears to hand Leeds a penalty.

Becchio stepped up to send Bolton goalkeeper Adam Bogdan the wrong way from the spot.

The victory means Neil Warnock's side earn a fifth-straight home win for the first time since 2009 as they contended without Jerome Thomas and Luke Varney because of a virus while Paul Green, McCormack and Paddy Kenny all defied the illness to play.

For Bolton it was another blow to their hopes of a top-six finish and they will rue the early miss from Eagles as the ex-Manchester United winger struck the post in the 20th minute despite being clean through.

Eagles then fired in from 35 yards to stretch Kenny who tipped the ball wide before Marcos Alonso hit an effort well over.

Then in the 65th minute Mears needlessly bundled McCormack over in the area after he had picked up David Norris's mis-hit pass.

Becchio, who was rested for Leeds' 2-0 defeat at Hull on Saturday, then put away his 18th of the season from the spot.

David Ngog's claims for a late penalty for Bolton were waved away and the Trotters stay eight points off the play-off positions.

Leeds manager Neil Warnock: "In the circumstances I can't be any prouder of the lads or praise them enough for the effort they put in.

"It wasn't a classic but it was all about desire. We were a bit nervous in the first half. When you get the drubbing we did at Hull it knocks the stuffing out of you but we grafted in there today and the best move of the match led to the penalty.

"On paper Bolton have a far better team than us but you don't win matches on paper."

Bolton manager Dougie Freedman: "The referees and their assistants are part-time, so it is not their fault [for not giving Ngog a penalty]. They don't train all week and they don't get help. They don't get coached or mentored.

"There should be a more professional approach because there is so much at stake.

"It was a game we should have won because we created most of the chances. Our game plan is working but our defence is letting us down and that is what happened."