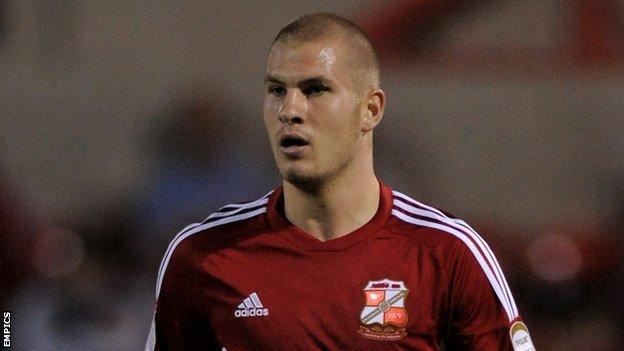 After a goalless first half, Collins headed the Robins in front from Matt Ritchie's corner within two minutes of coming on in place of Chris Martin.

He fired in to double the lead at the second attempt before setting up Danny Hollands to make it 3-0.

Collins completed a 12-minute hat-trick with a shot from inside the box before stooping to head in his fourth late on.

It was the second successive game that Swindon had hit five goals at home, following their 5-0 win over League One leaders Tranmere before Christmas.

"I'm shell-shocked, to tell you the truth, I thought for 60 minutes our tactics were working, we were frustrating them. They had to make three substitutions to get where they wanted to get, but that's what they can do.

"We had a mad 10 minutes where our discipline just went. What you can't do is go chasing the game immediately after going 1-0 down.

"Half-time, I don't think anybody could see that coming whatsoever. I think it was a game where we've really frustrated them, you can tell from the sidelines and the substitutions they made immediately afterwards they weren't happy with what they weren't able to do against us, and that was the game plan and it was working fantastically well"