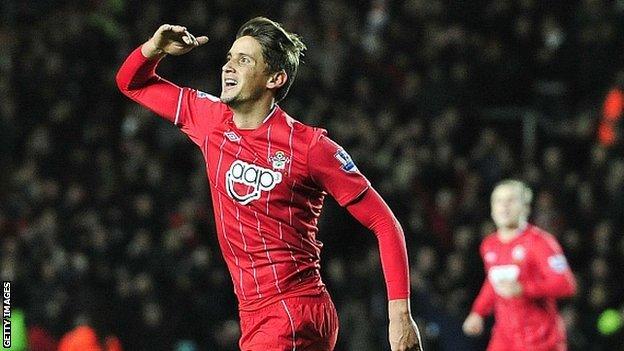 Southampton climbed out of the Premier League relegation zone after securing a draw with Arsenal but were unfortunate not to pick up all three points.

The Saints went ahead when Gaston Ramirez seized on a loose ball and drilled past Wojciech Szczesny.

But Arsenal hit back before the break when Guly do Prado diverted Theo Walcott's free-kick into his own net.

Ramirez thought he had given the hosts the lead but his sharp strike was ruled out for a foul on Laurent Koscielny.

A winning goal would have been just reward for a performance in which Southampton largely outplayed their illustrious opponents.

After losing their first four league games, the Saints have only suffered two defeats in their last 10 and have now leapfrogged Wigan to exit the relegation zone on goal difference.

In attack, Ramirez and Rickie Lambert were a constant menace to the Gunners defence, whilst at the other end Theo Walcott was starved of service after being given another chance to press his claims for a regular starting berth up front.

Walcott cut a forlorn figure in an Arsenal side that was a pale imitation of the team that scored 15 goals in winning their previous four games.

"I have seen Arsenal a lot over the last few years and this is the worst I have seen them play. Their passing was terrible, they were shambolic today on the ball.

"This is supposed to be a team that is competing to finish in the top four. I think Tottenham and Chelsea are stronger, Arsenal have left themselves too much to do."

After Santi Cazorla had gone close with a dipping 30-yard strike Arsenal's attacks repeatedly broke down in the final third.

Their failings in possession enabled Southampton to grow in confidence and the opening goal reflected their increasing ascendancy in the game.

It followed a mix-up in the Gunners defence as both Bacary Sagna and Kieran Gibbs made a hash of their clearances, allowing Ramirez to fire a loose ball past Szczesny.

Southampton should really have preserved their lead until half-time but were let down by a misjudgement from Brazilian Do Prado, who needlessly stretched out a leg at Walcott's free-kick from the left wing and diverted the ball past Artur Boruc.

Do Prado set out to atone for his error after the break and drew a sharp save from Szczesny at his near post with a rasping drive from outside the area.

His effort was the catalyst for another dominant spell from the home side in which Jason Puncheon lashed into the side netting from inside the box and Ramirez drilled a long-range effort over the bar.

The Uruguayan was convinced he had given Southampton the lead midway through the half when he took a chipped pass on his chest and swivelled to fire home, but the goal was ruled out for a shove on Koscielny.

Both managers made changes in a quest for a winning goal, with Arsenal substitute Gervinho firing into the side netting and Mikel Arteta going close from 25 yards.

Puncheon then had a late chance to win the match for Southampton but he fired straight at Szczesny and the home side had to settle for a point.

Southampton manager Nigel Adkins: "It was a good performance. Arsenal have been scoring a shed load of goals and we nullified that threat and carried plenty of threat ourselves.

"The own-goal was a spawny one that came off his toe but these things happen and we'll get the rub of the green soon.

"They started brightly but we stuck out it, grew in confidence and played well."