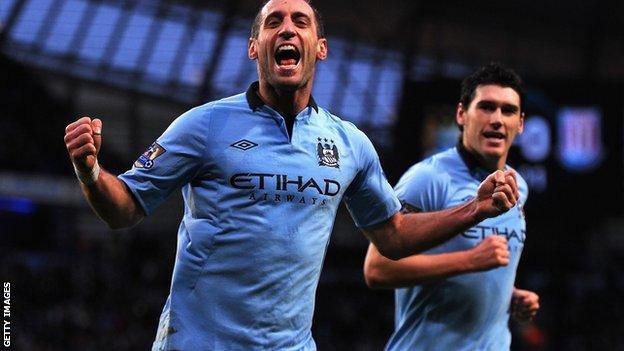 Manchester City had to be patient against a determined Stoke side but ran out comfortable winners to stay seven points behind Premier League leaders Manchester United.

The Potters visited the Etihad Stadium on the back of a 10-game unbeaten run and with a game-plan of frustrating the champions.

It was a tactic that worked for most of the first half until Pablo Zabaleta broke the deadlock and, from then on, the hosts were comfortable.

Edin Dzeko gave Roberto Mancini's men breathing space after the break and Sergio Aguero sealed a one-sided win from a penalty awarded after Steven Nzonzi had fouled David Silva outside the box.

The margin of victory was a welcome boost for Manchester City's goal difference, although United outscored them in their win at Wigan.

But in a week where he bemoaned his inability to sign Robin van Persie in the summer, Mancini will be cheered by the fact that, with his side scoring seven goals in their last two games, his strikers appear to be firing again.

Only a late hamstring injury to Aguero, who was by far the home side's most effective attacking force from the first whistle, took the shine off their day.

The game was barely a minute old when the Argentine striker met a James Milner cross but saw his shot blocked by Asmir Begovic at his near post.

City on the spot

Manchester City have now taken 22 penalties in the Premier League since August 2010, and 21 have them have come at the Etihad Stadium.

That set the tone for a first half that turned into an almost endless exercise of attack versus defence, with the champions unable to take their chances when they found a way through Stoke's massed defence.

Aguero was wasteful when he fired over after running on to Gareth Barry's clipped pass but went a lot closer when he shaved the post with a header from another Barry delivery and saw a fizzing shot clawed away by Begovic.

With the score still goalless, frustration among the home fans inside the Etihad Stadium was growing, although it was directed at Stoke's perceived time-wasting tactics rather than their own side's shortcomings in front of goal.

It was Zabaleta who put the latter right just before half-time, taking advantage of some uncharacteristically poor Stoke defending to advance unchallenged from the right touchline with Milner, and tuck away the loose ball after Begovic blocked Milner's cross.

The pattern of the game did not change after the break, with the title contenders still the only side who looked like scoring, and they did not take long to put the game beyond Stoke's reach.

Dzeko, who had already crashed a dipping first-time shot over the bar, was in the right place to slot home when Begovic spilled Aguero's angled shot.

Stoke, at last, ventured forward with intent and Joe Hart was forced into his first meaningful action of the game when he clawed away Charlie Adam's free-kick, before Jon Walters skewed a shot over from close range.

The Potters' chances of a comeback still looked remote, however, and they were ended completely when Aguero made it 3-0 from the spot.

There was still time for Glenn Whelan to force a late diving save from Hart, with the England keeper pushing his shot on to a post.

But the only late drama at the Etihad Stadium was the injury to Aguero, who limped off late on. The champions can ill-afford to be without one of their most potent strikers for much of 2013.

Manchester City manager Roberto Mancini: "We played very well, like we played against Norwich and Sunderland, but sometimes it's not enough to play very well, it's important to score.

"In the first half we deserved to score two or three goals, but it was difficult because Stoke is the best defence in the Premier League.

"It was important to keep a clean sheet, because if we start to score and don't concede a goal we can have a chance to recover these points."

Stoke City manager Tony Pulis: "We've come here and played right at our maximum, and they've played below par. We didn't play as well as we can play, and they played well.

"Sometimes you have to be a little bit grounded, not get carried away and look at facts and figures. When you have spent that much money on the quality they have, it's always difficult.

"We've played Tottenham, Liverpool then Southampton with 10 men for the last 25 minutes so it's been tough. Coming here, against one of the best teams in the Premier League, the lads looked tired in the second half. They kept going, they had great spirit, great commitment and I'm not criticising them at all."