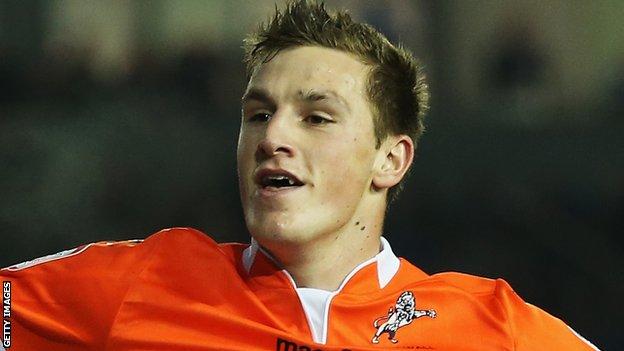 Chris Wood scored twice on his debut as Leicester secured an emphatic Championship victory over Huddersfield.

Wood, signed from West Bromwich Albion, headed in an early opener before adding a second with a low shot.

Ritchie De Laet made it 3-0 before half-time from Anthony Knockaert's pass, before the latter scored twice in three second-half minutes.

Scott Arfield pulled one back for Huddersfield but Martyn Waghorn volleyed in a sixth for Leicester.

The win was fifth-placed Leicester's second in succession while Huddersfield are without a victory in 10 games.

Wood, who scored 11 goals during a loan spell with Millwall earlier in the season, looked dangerous from the outset and took just six minutes to make his mark, heading home after Huddersfield keeper Alex Smithies kept out David Nugent's shot.

Leicester's front two combined again in the 24th minute as Nugent fed a pass to Wood, whose low shot flew in off the post.

The game was over as a contest as the home side scored a third just before the break. Knockaert drawing out Smithies before passing to De Laet, who made no mistake.

There was to be no reprieve for Huddersfield after the restart, as Knockaert scored twice in three minutes.

The Frenchman first swept in from Paul Konchesky's cut back, before curling a shot beyond Ian Bennett, who had replaced the injured Smithies at half-time.

Arfield put Huddersfield on the scoresheet in the 59th minute, scoring at the second attempt after his first shot was saved by Kasper Schmeichel.

Leicester manager Nigel Pearson said: "The players have shown a lot of character. Chris Wood played a very positive part in what a was a very good team performance. His attributes fit the bill for a what we are looking for.

"He is a team player and works very hard and shows a lot of football intelligence as well. It is pleasing that that he has got off to such a good start but it is about the group.

"It was a thoroughly professional performance today."

Huddersfield manager Simon Grayson said: "We wanted to start the new year in a positive manner but today could not have been any worse for us.

"We wanted to be hard to beat and make sure it was a difficult afternoon for Leicester and make sure they didn't have an easy ride.

"But the way we started the game allowed them to dictate to us what they wanted to do. And before we knew it we were a couple of goals down and too many times made the wrong decisions."