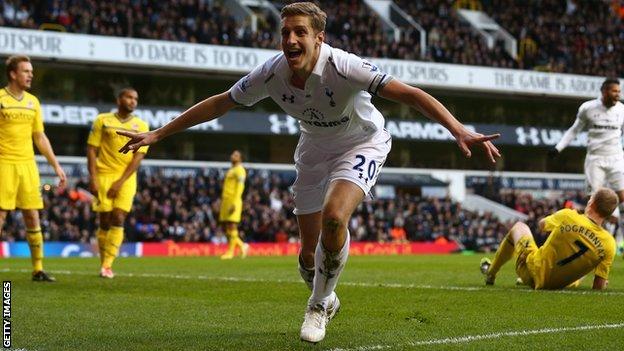 Tottenham moved up to third in the Premier League table as they claimed a deserved victory against Reading.

The visitors went ahead when Pavel Pogrebnyak headed in a rebound after Ian Harte's free-kick hit the crossbar.

Despite Spurs having 30 shots on goal compared to only seven from Reading, the Royals were left regretting their failure to score in a five-minute second-half spell.

Pogrebynak had a shot saved by Hugo Lloris, a last-ditch challenge from Kyle Walker denied Jimmy Kebe and Dawson headed an Alex Pearce effort off the goal-line.

Tottenham had been the only club in the Premier League not to have conceded a goal in the first 15 minutes of a match this season but that record ended as the visitors took a fourth-minute lead.

Pogrebnyak was fouled by Mousa Dembele and Harte's curling free-kick from 25 yards hit the crossbar but the Russian striker reacted first to head his seventh goal of the season.

However, Reading's lead did not last long as Dawson out-jumped two defenders to head in an equaliser.

"Tottenham played some smashing football, but a lot of it was in the centre of the field and they didn't have the penetration they should've had.

"The one thing about Reading is they will fight for anything and they were resilient for as long as they could be.

"Jimmy Kebe missed a great opportunity to make it 2-2 and they will have to battle all the way to the end of the season if they are to stay up."

The Royals, one of three teams to not win an away Premier League game this season, had to defend for the rest of the half with lone striker Pogrebnyak working hard but seeing little of the ball as Spurs dominated.

Jermain Defoe, who scored twice in Spurs' 3-1 win at the Madjeski Stadium in September, put an effort over the bar and later blasted a powerful shot wide.

The visitors were hanging on as goalkeeper Adam Federici reacted to save a deflected shot from Sandro and also gathered Dembele's effort at the second attempt as Adebayor waited to pounce.

Ex-Reading man Sigurdsson, who replaced the suspended Gareth Bale, also had a shot blocked and Dembele was unlucky to shoot narrowly wide.

Spurs maintained their pressure early in the second half when Defoe was again denied by Federici.

But the goalkeeper could do nothing as Tottenham took a deserved lead when Adebayor scored only his second Premier League goal of the season.

Lennon got to the byline and dinked a cross to the back post where Adebayor beat Pearce in the air to power a header past Federici.

More away day woe for Reading

Reading are one of three teams to have failed to win an away game in the Premier League this season, with the others being Newcastle United and Queens Park Rangers.

However, the Royals' total of only two points from 11 league matches on their travels in 2012-13 is the lowest in the top-flight.

The last time Reading won an away Premier League match came in May 2008, when they thrashed Derby County 4-0.

Spurs, who have dropped points at home against West Brom, Norwich, Wigan and Stoke already this season, pushed for a third with Sandro, Lennon and Kyle Naughton all wasting chances.

The hosts had dominated but nearly paid the price for their misses as Pogrebynak beat Jan Vertonghen and had two opportunities but Lloris made his only save of the game before Pogrebynak headed the rebound wide.

Jimmy Kebe also had a late chance when he was denied by a last-ditch challenge before Dawson headed Pearce's effort off the line.

But the home fans could relax when substitute Dempsey's shot took a huge deflection off Mikele Leigertwood with the ball looping up past Federici to seal Tottenham's win, their seventh in nine Premier League matches, while Reading remain 19th, five points adrift of safety.

"It was a difficult game in the beginning and the early goal gave them hope.

"But we did well to close out the festive period with 10 points from four games and hopefully we will continue this form to put ourselves in the position we want to be.

"Aaron Lennon is such a magnificent player and sometimes he does not get the recognition he deserves but his form has been extraordinary. He has been magnificent for us, scoring goals like last week, and is such a good player.

"The three points have meant we have opened a bit of a gap over West Brom, Everton are still there and Arsenal have a fixture to play."

"It was frustrating to concede an equaliser straight after scoring and if we could have had it at 1-0 at half-time then it would've been a really good game.

"Even when they were 2-1 up we had three great opportunities and they scored a deflected goal to win it.

"But at 2-1 we were right in it; their goalkeeper has made a decent save and Jimmy Kebe was denied by decent defending from Kyle Walker.

"This is a really good Tottenham side that Andre has built here and not many people will come away from here taking points."