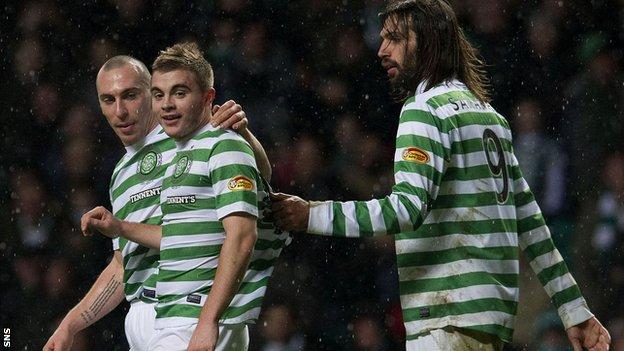 It will be top versus bottom in the Scottish Premier League on Boxing Day as Celtic visit Dundee for an evening kick-off at Dens Park.

Ominously for the chasing pack, the leaders have won four on the trot in the league to open up a five-point gap, with a game in hand over most of their rivals.

Dundee were widely tipped to struggle after receiving a late invitation to the top table and have picked up just 12 points from their opening 18 matches.

Six points adrift of Ross County, Barry Smith's men have conceded 11 goals in their last four outings after signs of a revival in November.

Celtic boss Neil Lennon said: "It will be a cup final for them, but I suppose every game is for them really.

"They have nothing to lose against us and there is no expectation level for them either, so their players, like most teams, will try and raise their game for us.

"It's a very dangerous game and one we can't take our eye off."

These two sit mid-table after defeats on Saturday and will be frustrated not to have picked up a few more points.

United have suffered from Gary Mackay-Steven's injury problems and have looked vulnerable in defence all season, while St Johnstone have not been able to field a settled side since a run of five straight wins had them in second place in mid-October.

The pick of the games at 15:00 GMT sees Aberdeen visit Motherwell's Fir Park.

Well lost momentum in a 2-1 loss to St Mirren on Friday but can take heart from a performance that really should have earned something and a six-game unbeaten sequence in the league prior to that.

Stuart McCall's side, who finished clear in third last term, have quietly crept back up the table and are just two points behind second-placed Inverness Caledonian Thistle.

Aberdeen, who knocked the Steelmen out of the Scottish Cup, arrested a run of three league defeats on the trot with a 2-0 win over St Johnstone.

The Dons embarked on a marvellous 10-game unbeaten streak after a narrow defeat at Celtic Park on the opening day of term but have been erratic since then as a lengthy injury list took its toll.

Inverness have been the league's surprise package and have turned in some wonderful performances to fully merit their lofty position.

St Mirren will travel to the Highlands with a degree of trepidation, given Terry Butcher's side have knocked in 14 goals in their last four league outings.

Billy McKay is the league's leading goalscorer, while Aaron Doran is top of the charts for assists, so the inconsistent Buddies are likely to have their hands full.

Ross County made a solid start to their debut season in the top flight, based chiefly on a resolute defence.

However, a run of seven games without a win in the league has led to the Staggies slipping down the table, with only Dundee below them.

County picked up one of their three victories against Hibernian and will be looking to make it a double against a side that has been wobbling after a scorching opening.

Pat Fenlon's men have lost four of their last six league games and the goals have dried up for top scorer Leigh Griffiths.

But Eoin Doyle has found the net three times in the last two matches and Hibs still match Celtic for the best home record in the division.

The financially troubled visitors are resurgent after bringing striker John Sutton back into the fold and playing with two up top, while Kenny Shiels's team have struggled at Rugby Park.

SPL matches have been wildly unpredictable this term, with a mere nine points separating second from ninth in the table, and much of the fare has been entertaining as the goals-per-game average hovers near three.

If the goal glut continues, it will make a welcome addition to the other excesses of the season.