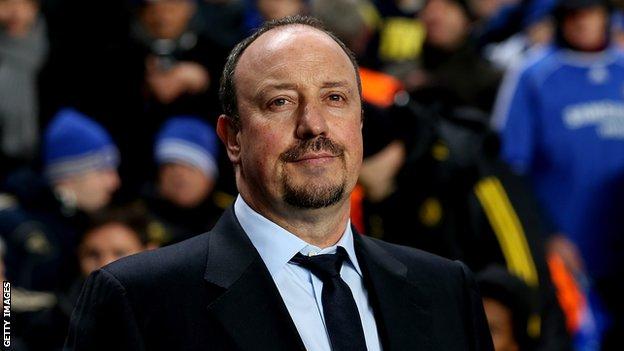 Sunday's 8-0 annihilation of Aston Villa, on the back of a 5-1 thumping of fierce rivals Leeds in the Capital One Cup, has certainly restored a sense of pride in the team and club after a disastrous few weeks on and off the pitch.

So clinical and merciless were the Blues as they ran amok against Villa's increasingly demoralised young side that it was easy to forget that just four weeks ago, Benitez was booed into the dugout for his first game against Manchester City.

Appointed following Chelsea's slide down the Premier League table and unable to prevent their Champions League exit, it is fair to say it would have been almost impossible to find a less popular replacement for Blues legend Roberto Di Matteo.

The mood has changed from outright anger to resignation, and then apathy in subsequent games. But against Villa, there was a palpable sense of acceptance and maybe even a grudging respect.

Benitez said winning football matches was the key to winning respect and the backing of fans. He could well be right. Chelsea played with the sort of ruthlessness, quality and fluency that is hard to resist.

Maybe it was the feel-good festive season factor, but the feeling around Stamford Bridge definitely seemed different to previous weeks. The Spaniard's presence was almost forgotten; the football took centre stage.

But the atmosphere, which was poisonous at the end of November, was positive well before Chelsea began to steamroller their outclassed opponents.

Villa fans contributed fully to that atmosphere, and they didn't stop singing throughout.

They didn't stop singing when a stonking early header from Fernando Torres - his seventh goal in six games - put the hosts 1-0 up.

They didn't stop singing when David Luiz's sublime free-kick and Branislav Ivanovic's header made the game safe by half-time.

And they didn't stop singing as Chelsea ran riot in the final half-hour, scoring goals at will and threatening to reach double figures.

Even at the end, when it would have been understandable and excusable to trudge away in dismay, they carried on singing.

It all provided a strange and interesting contrast to the corresponding fixture this time last season.

On that occasion it was Villa whose manager was set up as the pantomime villain in the eyes of his own fans.

And even though the visitors triumphed 3-1 in what was surely Alex McLeish's highlight as manager, the win only provided a brief respite for the former Birmingham boss.

In truth, there was precious little else to compete with in terms of highlights.

But Villa supporters never accepted McLeish and never wanted to. Of course, they didn't have the confusion of having to deal with a team playing with confidence and challenging for honours.

Yet despite being "beaten up", as boss Paul Lambert so accurately put it, Villa fans can now see progress and have not lost sight of the bigger picture. Their humiliation, Lambert said, "should not mask" all the good work witnessed in their impressive six-game unbeaten run.

In Barry Bannan they have a midfielder with both ability and tenacity, in eight-goal striker Christian Benteke they have a genuine threat up front, while goalkeeper Brad Guzan showed just why he is being preferred to Shay Given with at least two world-class saves in a wonderful display.

They have energy, enthusiasm and decent quality, and they have defenders of obvious promise - even if it was rarely on display in west London.

Benitez though will need far more than a thumping win over inexperienced opponents to truly convince his doubters.

But his team is taking shape. Torres was alert and finally looked prepared to gamble with his running, as shown by his anticipation for his early headed opener, while Frank Lampard dictated the midfield with a typical calmness that allowed Eden Hazard, Victor Moses, Juan Mata and Oscar to roam free and wreak havoc.

At the back Chelsea looked assured and Luiz, so widely criticised as a defensive liability, provided the dynamism alongside 34-year-old Lampard in the centre of the park.

However despite an impressive performance, Benitez does not appear to see Luiz as a long-term solution to his midfield conundrum.

He may well continue to deploy the supremely gifted and versatile Brazilian in midfield at times, but it does not seem to be his preferred option.

Lampard was taken off after 60 minutes with the Norwich game on Boxing Day in mind and Ramires and Mikel are both available again.

"The squad that we have now is a good squad and we have to keep the balance," Benitez said. "We have a problem with Oriol and are managing with David Luiz in the middle of the park now so we are trying to adapt."

Chelsea and Villa could meet again in a couple of months in the League Cup final.

Villa are strong favourites to beat League Two side Bradford over two legs. And Chelsea will fancy their chances against Swansea City.

By that time, should they make it, both managers will have a much clearer idea of how fickle their respective fans are.

Will Villa fans, now just seemingly so relieved that their boss is not McLeish, lose patience with Lambert if a relegation battle develops?

And will Chelsea supporters continue to sing Di Matteo's name in the 16th minute of every game if Benitez's entertainers can claw their way back into the title race and reach a couple of cup finals?

Is it time for the Londoners to move on and embrace 2013, no matter who the manager is? Maybe Chelsea fans are still not totally convinced, but the frostiness is definitely thawing slightly, even if warming may be an overstatement.