Linfield boss Jeffrey also said that another of his defenders Albert Watson was injured in the Seaview clash.

"Albert Watson got a whack which you couldn't call a flailing arm," insisted the Linfield boss after the game.

"William Murphy has got concussion. That's what I'm saying to you."

When it was pointed out that Crusaders boss Stephen Baxter was "disappointed" by some of the officiating in the fiery Seaview encounter, Jeffrey replied:"If Stephen is disappointed, multiply mine by about 20 and another 20 again.

"In terms of the analysis of the game, Crusaders are a big strong physical team and they used that asset very, very well.

"They put a lot of high balls into the box." 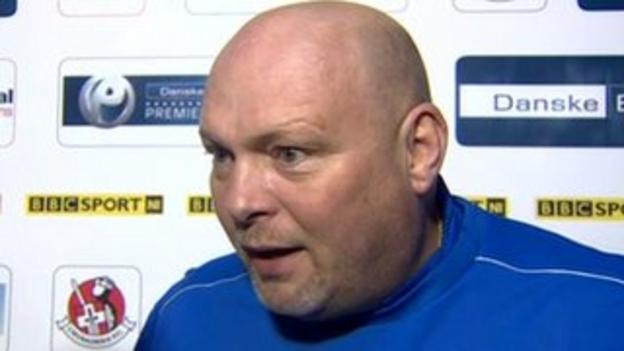 Crues boss Baxter made clear his unhappiness with the controversial awarding of a second-half penalty which Brian McCaul netted to put the Blues 2-1 up.

However, Jeffrey felt that the correct decision had been made.

"But Philip (Lowry) is very clear in saying that he was held and if that was the case, then it's a penalty, end of story."

Jeffrey acknowledged that he had been left "sick as a proverbial parrot" by David Rainey's injury-time equaliser for the Crues but he praised his team's overall display.

"In terms of attitude and commitment and hunger and desire and some decent football too, I'm very proud of my players."

Referring to the second-half penalty and Jordan Owens' controversial sending off, Crusaders boss Baxter felt that his team "missed out on a couple of big decisions".

"But that's the way it goes at this level of the game," added Baxter.

"We've done well to dig it out. We were behind twice and we fought back to score good goals and take something from the game, which we fully deserved."

"I thought we were brilliant in the second half and dominated the play.

"You'll be a little bit disappointed when you get a penalty against you and one at the other end which you fell you should have had."

Baxter added that he was "particularly upset" about Owens' dismissal after being adjudged to have elbowed Watson.

"I asked Jordan and he's a honest lad and he said: 'I just challenged for a ball and he sent me off'.

"If it's a flailing elbow and done with intent but Jordan is not that sort of lad.

"We now lose one of our key players for the a big match (against Cliftonville) on Boxing Day and there are always further repercussions from sending offs."