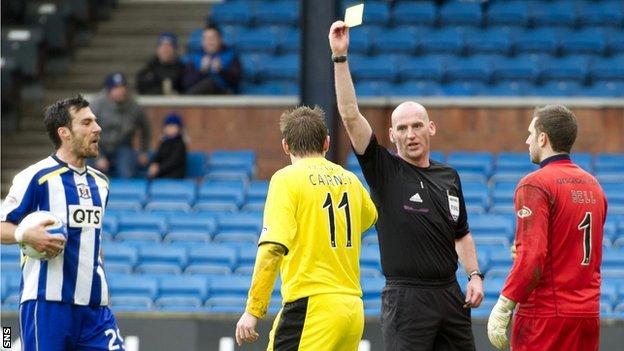 Hibernian manager Pat Fenlon was disappointed Paul Cairney was booked following an unsuccessful penalty claim in the 1-1 draw with Kilmarnock.

Cairney went down following Killie defender Michael Nelson's challenge in the box and the midfielder was cautioned by referee Bobby Madden.

Fenlon joked he may need to "moan about referees" to get decisions his way.

"The more disappointing thing for me is that he's booked and he's picked up a suspension as well for that," he said.

"I haven't seen it again. Paul says he was taken down, I believe him.

Kilmarnock defender Nelson sympathised with Cairney, admitting he had made contact with the visiting midfielder.

"There was contact but how far down he was when the contact was made, I don't know, we will have to see it again," he said.

"As he slipped the ball to the side he was already going down.

"It could have gone either way but the referee seen it so I am not going to argue.

"But it is probably doubly harsh that the lad got booked as well.

"Just because the referee doesn't think it was a penalty doesn't automatically make it is a dive so I think it is harsh when it happens to people."

"With Leigh [Griffiths] not scoring, people spoke about us being a one-man team but Eoin is chipping in with goals and Leigh contributed with the set-up," Fenlon added. "It was a good move, good goal.

"We showed a bit of character. They showed tremendous character to come back in and put in a decent performance.

"I was pleased with our performance. We're a bit disappointed we haven't taken three points. We maybe just shaded it."