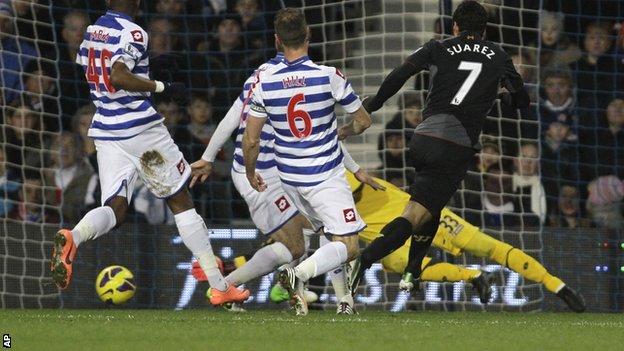 A woeful QPR display intensified their relegation fears as they were beaten by a Luis Suarez-inspired Liverpool.

Reds' boss Brendan Rodgers was absent from the game with a bug but Suarez twice capitalised on poor defending to put the visitors 2-0 ahead.

QPR were denied a penalty when Adel Taarabt's free-kick hit the arm of Jordan Henderson, before Daniel Agger headed in Liverpool's third.

Steven Gerrard's shot was cleared off QPR's goal-line as the Reds won easily.

Bottom-of-the-table QPR tamely went down to a 12th league defeat in 20 games this season and had the air of a side resigned to relegation, with eight points separating them from safety.

They had seen fellow bottom three sides Reading win and Southampton draw on Saturday and, while the least QPR might have showed is the stomach for a survival fight, they were missing that quality to an alarming scale.

Liverpool were quicker, hungrier and stronger and, although they were allowed the freedom to dominate the game, they did so with some delightful play which should help Rodgers feel better.

The livewire and menacing Suarez was again key to their win and he put his side 2-0 up in the first 16 minutes.

"Luis Suarez was electrifying for Liverpool in the first half. QPR improved belatedly but never really threatened. A massive improvement and miracle is needed if they are to avoid relegation. If they defend like they did in the opening half-hour then they will be in the Championship next year."

He jinked past a defender and had a 20-yard shot parried away, before giving his side the lead when he eased past centre-back Clint Hill and slotted a shot into the bottom corner.

The Uruguayan's second came when his low cross was cleared back to him by the sliding Nedum Onuoha to leave Suarez to side-foot in his 13th league goal of the season.

QPR playmaker Taarabt had a fair shout for a penalty when his free-kick hit the arm of Henderson, although referee Anthony Taylor was unmoved.

But QPR were crumbling against the endeavour and quality of the visitors and conceded a third when Agger headed in Gerrard's cross.

Soon after, Suarez shrugged off defenders Onuoha and Ryan Nelsen, before teeing up Gerrard - whose shot was cleared off the goal-line.

QPR fans booed their side off at half-time and their side continued to be outplayed after the break.

A Suarez shot was well saved by Julio Cesar, while Henderson shot high.

The home side were 2-0 down with 13 minutes left against Liverpool last season before rescuing a 3-2 win which kick-started them beating the drop.

There was no such turnaround this time around, with Chelsea and Tottenham next up in the top flight for the Loftus Road club.

"That's probably the best we have played for a long time with the display in the first half. The way we took our chances was pleasing.

"Luis Suarez is superb. He's a maverick. He creates chances for himself, finishes them and is a great lad.

"It was great result from the lads and the way we performed in the first half secured the win. We were disappointed with the defeat by Stoke on Boxing Day and the response from the players was terrific."