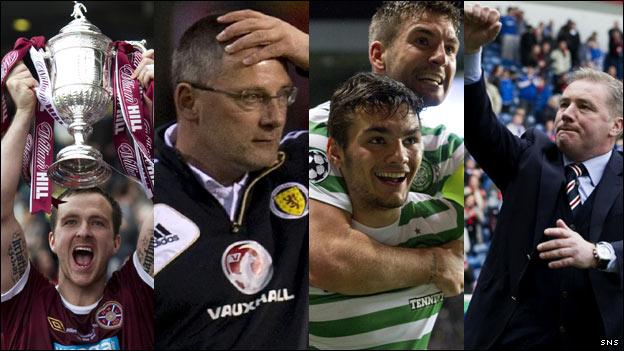 When 2012 opened with Celtic leading Rangers by two points in the Scottish Premier League, it looked like business as usual, with Glasgow's Old Firm duking it out for dominance.

And, with Craig Levein plotting Scotland's World Cup qualification from a group that did not include a recognised big-hitter, the Tartan Army dared to dream of packing their kilts for Brazil.

Fast-forward to the second weekend in December and a Scottish Third Division match between Rangers and Stirling Albion was attracting a bigger crowd than the mighty Manchester rivals going head-to-head for top spot in the richest league in the world.

And we had a man whose last club job was with the amateurs of Queen's Park in charge of the national side.

"I've been working at the BBC since 1991 and there have been many times when you say 'right, that's it, there is never going to be another year like that'," explained Sportsound presenter Richard Gordon.

"I'm going all the way back to the Fergus McCann era and Celtic on the brink.

"But what has happened to Rangers over the course of 2012 was just remarkable. Just when you thought the story had gone as far as it could, there would be something else."

Rangers, Scotland's most successful club, did not pick up a trophy but hogged the sports news like never before.

The disastrous ownership by Craig Whyte saw the Ibrox outfit slide into administration on Valentines Day.

Just a few months later, with the old regime destined for liquidation, an exodus of top players and a 12-month transfer embargo, Rangers were preparing for life in the bottom tier of the senior game.

They did so under the stewardship of Charles Green after several expressions of interest from around the globe, some more serious than others.

Before that seismic change to the nation's footballing landscape, Kilmarnock had lifted the League Cup for the first time, Celtic cantered to the SPL title and Hearts demolished Edinburgh rivals Hibernian in the Scottish Cup final.

Dieter van Tornhout made fewer than 10 appearances for Killie, but the Belgian striker will always be recalled with fondness thanks to his late headed winner against Celtic at Hampden.

Sadly, Kilmarnock's day of glory was marked by grief as midfielder Liam Kelly's father, Jack, suffered a heart attack on full-time at the stadium and died.

Celtic, who had trailed Rangers by 15 points early in the season, finished top of the pile by 20 points, losing only one league match after the turn of the year for their first title since 2008.

Having staved off the threat of relegation, Hibs fans travelled to Hampden in May hoping to end their 110-year-wait for Scottish Cup success.

However, the green section of the national stadium was close to empty with half-an-hour remaining as dizzily jubilant Hearts supporters celebrated a 5-1 triumph, Rudi Skacel knocking in two goals on his farewell performance.

Derek Adams was PFA Scotland's manager of the year as Ross County joined the SPL for the first time and the Staggies' mean defence at home has helped them settle into their new surroundings.

The summer break afforded no respite from football as "sporting integrity" and "financial Armageddon" became key battleground phrases in an increasingly acrimonious debate over the future of Rangers.

A plan to parachute the Ibrox club into Division One failed, with SPL chief executive Neil Doncaster and his counterpart at the Scottish FA, Stewart Regan, attracting opprobrium from all sides.

The SPL fixtures for 2012/13 were released a month before Dundee were finally invited to replace Rangers and St Johnstone and Dundee United were already out of Europe before the Ibrox club received full SFA membership to play in Division Three.

Scotland were humiliated in the USA in May but saw off Australia in August to boost morale ahead of World Cup qualifying.

Four games later, hopes of reaching Rio or Sao Paulo lay in tatters and Craig Levein, who had belatedly made peace with striker Steven Fletcher, had been removed from his post as coach.

A meagre two points were yielded before a match against top seeds Croatia had been played and Under-21 coach Billy Stark was promoted, on an interim basis, to oversee November's friendly win in Luxembourg.

"It's hugely depressing because there was a sense of real optimism," explains Gordon.

"The manager was talking about a group in which we could win all 10 games!

"On the face of it, the Scotland squad is the best we've had for years. The players are talented, they all said they were right behind the manager and bought into everything he was trying to do.

"But they just could not get the results.

"Sometimes you find with a manager, irrespective of what he does and how much everyone is pulling for him, it's just not going to work."

A week before Scotland's less than convincing 2-1 success against the part-timers of Luxembourg came the highlight of year, with Celtic toppling Barcelona.

Neil Lennon's side saw off HJK Helsinki and Helsingborgs to reach the Champions League group phase with the minimum of fuss.

Celtic opened with a tentative 0-0 at home to Benfica but grew in confidence after beating Spartak in Moscow for their first group stage victory on the road in 19 attempts.

A stoppage-time strike denied Celtic a point at the Nou Camp before the star-studded Catalan team fell to goals from Victor Wanyama and Tony Watt on an unforgettable night in the east end of Glasgow that moved Rod Stewart to tears.

A late penalty from Kris Commons then settled a nervous home win against Spartak to make sure Celtic progressed to the last 16, where they will meet Juventus next year.

With Rangers absent from the top flight and Third Division clubs revelling in the windfall brought by the Ibrox club's huge following, it was widely predicted that Celtic would run away with the SPL.

Neil Lennon's team are starting to pull away from a congested pack, while Dundee are losing ground at the bottom, but the rest is anything but banal.

Operating on a shoestring budget, free-scoring Inverness have been a breath of fresh air, while Motherwell's small squad continue to impress and there have been overdue signs of improvement at Hibs and Aberdeen.

"The Rangers situation has left a huge financial challenge, but, certainly on the park, the SPL has dealt with it very well," adds Gordon.

"The table has been so competitive.

"There have been really encouraging signs in the second half of the year, with teams playing the kind of football that we all enjoy."

Here's hoping 2013 brings more positive talk of on-field matters. There couldn't be another year like this one could there?