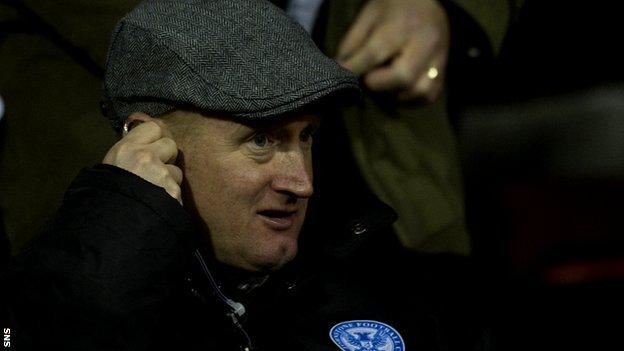 The swirling wind and lashing rain that assaulted Pittodrie made a mockery of the game, asserted St Johnstone manager Steve Lomas after seeing his team lose 2-0 to Aberdeen.

"The conditions were farcical today at times," said Lomas.

"I don't want it to sound like sour grapes but that wasn't a football match. The wind spoiled it as a spectacle.

"I feel sorry for any fan who had to pay for that."

St Johnstone lost to two second-half Niall McGinn strikes and Lomas admitted that he had been keen to sign his fellow Northern Irishman last summer but that Saints "couldn't compete with a club of Aberdeen's size".

From an entertainment point of view, there was no football played out there today. I didn't enjoy one minute of it

Instead it is Aberdeen who are benefiting from McGinn's 11 goals this season.

"The Aberdeen fans will be delighted they got the three points but as a game of football it was farcical," lamented Lomas, who continued his touchline ban and watched the Scottish Premier League encounter from the main stand.

"From an entertainment point of view, there was no football played out there today. I didn't enjoy one minute of it.

"But all credit to Aberdeen in the second half.

"They got it forward better than us. They deserved to win. They got it up, got hold of it and got it wide.

"The lad McGinn is in great form and it was super finishing by him."

Lomas acknowledged the excellent performance by another Northern Irishman, his goalkeeper Alan Mannus, in keeping the score respectable, and admonished Frazer Wright for failing to put Saints ahead in the first half when he met Dave Mackay's cross from the right.

"Frazer was unlucky," said the manager.

"He tried to get on the end of it but in the conditions the ball just skidded off the surface."

Saints lost Chris Millar to injury midway through the first half and the midfielder is now a doubt for the short trip to Dundee United on Boxing Day.

Lomas said: "Chris has tweaked his groin so we'll need to assess him and see how he is.

"It gives someone else an opportunity to step in and show their worth."