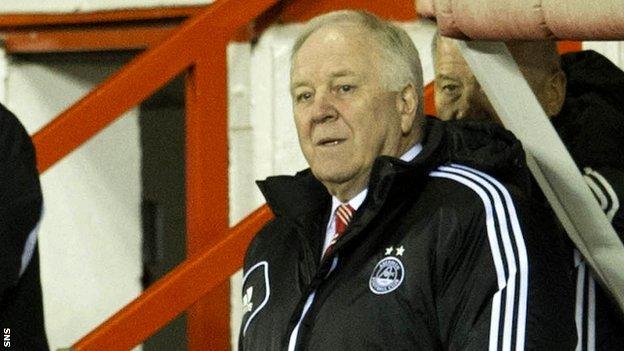 The tightness of this season's Scottish Premier League was typified by Aberdeen's leap from seventh to fourth with .

And Craig Brown's men can move into the top three if they secure a two-goal defeat of Motherwell on Boxing Day.

"It will be another hard game but it gives us the chance to catch them," said Brown.

"They are having a very good season. We hope we might have a couple of players fit again for the game."

The Dons manager felt his team were worthy of the three points against the Perth side, having enjoyed most of the possession and almost all the chances at a rain-lashed Pittodrie.

The win, he pointed out, was achieved despite the club's lengthy injury list and its youthfulness.

"We've got eight injured and one suspended. We have a good, solid squad," said Brown.

"We had 10 players under the age of 21. Three started and three came on. Every substitute was under 21. It's mandatory in the SPL to have three.

"That is a testament to the youth development policy here and to the capability of the young players.

"We put on [Jordon] Brown and [Craig] Murray at the end to give them a taste of the environment and compliment them on the work they are doing in the Under-20 team.

"It was a good Christmas present for the Aberdeen support."

Alan Mannus was terrific in the St Johnstone goal, denying the home side with a series of saves, particularly from Niall McGinn.

The Dons, though, were only denied a goal until the 55th minute when McGinn scored his 10th of the season with a low, curling free-kick.

Mannus kept the score at 1-0 for another 25 minutes before McGinn latched on to a pass by Jamie Masson to make it 2-0.

Brown continued: "I don't want to sound greedy but it could have been more were it not for the superb goalkeeping of Alan Mannus.

"There was one in particular when Niall McGinn side-footed the ball and turned away to celebrate the goal and all of a sudden found it was a save.

"I lost count the number of saves the keeper had. The worrying thing is that we had so many good chances but didn't score them.

For all Aberdeen's efforts, the game was spoiled by the dreadful rain and wind, but Brown praised his players for their willingness to attempt to play passing football.

"We tried to play," he added. "The distribution from the young full-backs Joe Shaughnessy and Clark Robertson was good.

"If you start from there, it gives you a chance, and with Russell Anderson and Mark Reynolds experienced in the heart of the defence, Jason Brown had nothing to do."