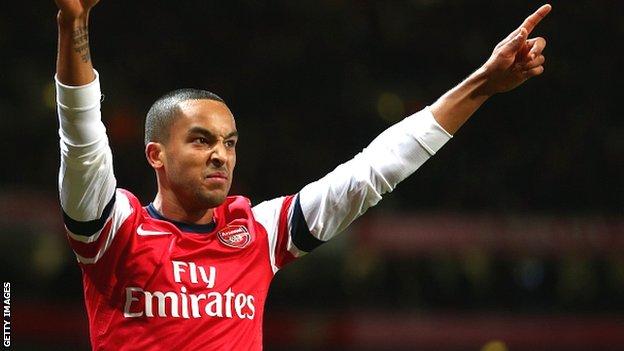 Theo Walcott scored three goals and set up two more as Arsenal overcame Newcastle in a 10-goal thriller and climbed to fifth in the Premier League.

Walcott, out of contract in the summer, swept Arsenal in front but Demba Ba equalised with a deflected free-kick.

Ba levelled again, only for Walcott to score twice more, either side of a brace from substitute Olivier Giroud.

Giroud hit the bar as Arsenal pushed for an eighth, but the result was secure and Arsenal extended their winning run to four games.

Emirates Stadium was engulfed by chants of "sign him up" as the full-time whistle approached, a reference to Walcott's contract dispute.

He has scored 14 goals in all competitions this season and four in three games since being deployed as the central striker.

His first effort, in particular, carried shades of Thierry Henry - Arsenal's record goalscorer who was watching from the stands and is training with the club during the Major League Soccer off-season.

"An amazing game. Festive fun and frolics at the Emirates. Seven goals for Arsenal, three for the excellent Theo Walcott. Arsenal need to sign him up and Newcastle need to overcome the heartache of their festive period."

It is hard to imagine Arsenal letting the 23-year-old leave if he continues to produce performances of this level.

Walcott left Newcastle stunned but while they are still without an away league win this term, they should take heart from impressive displays at Manchester United and Arsenal over the festive period.

They had four days less than Arsenal to prepare - - yet enjoyed plenty of early possession and Ba headed just over from Marveaux's corner.

Newcastle were punished for a high defensive line when Walcott latched on to Podolski's through ball and curled past Tim Krul - but Alan Pardew's men responded well and were rewarded.

Bacary Sagna conceded a needless free-kick outside the box and Ba's set piece took a heavy deflection off Jack Wilshere to elude Szczesny.

After half-time Podolski nodded Danny Simpson's throw to Santi Cazorla and he set up Oxlade-Chamberlain to drill past Krul, only for Gabriel Obertan to beat Sagna and cross for Marveaux to tap in.

The momentum was shifting like a pendulum and no sooner had Podolski headed Arsenal back in front after Wilshere's run and cross than Newcastle struck again for 3-3.

A weaving run from the outstanding Marveaux ended with a cross to the back post that let Ba ghost past Kieran Gibbs and convert.

Despite Pardew signalling to his players that they must not concede again, his message went unheeded as Walcott clipped his second.

The introduction of Giroud gave Arsenal a new dimension and the Frenchman headed in a Walcott cross before drilling past Krul.

With Newcastle tiring, Walcott shimmied his way past several defenders to chip Krul from a tight angle and seal his hat-trick.

Newcastle boss Alan Pardew: "We have given away soft goals and the match has got away from us. It was a heavy pitch at Old Trafford and we looked leggy after our exertions there.

"We did not have the energy to cope with them in the last 20 minutes. We put the ball at risk too often and some of the goals we gave away were not good enough for us.

"There was a clear difference between the two sides in the last part of the match. We got overrun, but we have to defend as a team. I don't want to put all the focus on the defence and the back four."

On whether Demba Ba will leave the club: "It will be what it will be. There is nothing we can do about that - the clause is there and that is that."