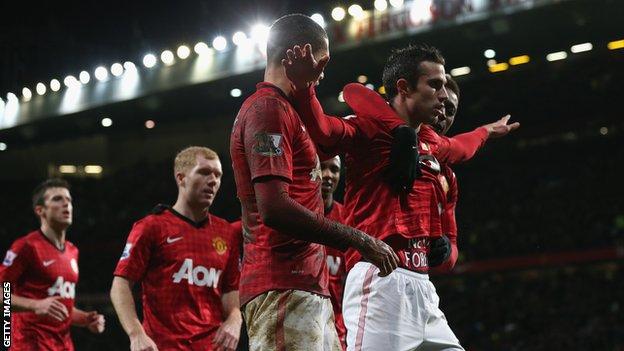 Manchester United will start 2013 with a seven-point lead at the top of the Premier League table after a hard-earned win over West Bromwich Albion.

But United substitute Robin van Persie sealed victory with a curling finish in the 90th minute.

This was not as comfortable for United as the scoreline might suggest, with the leaders forced to weather a spirited second-half display from the Baggies.

Nevertheless the outcome was a welcome early birthday present for Sir Alex Ferguson, who is 71 on Monday.

The United manager starts the new year with a 13th Premier League title firmly within his sights after his side ended a trophyless 2012 with a victory sprinkled with positives.

Shinji Kagawa, back from a knee injury, was influential in his first appearance since October while captain Nemanja Vidic helped United to only their fourth Premier League clean sheet of the season.

Ferguson could even afford to start with Van Persie on the bench ahead of Tuesday's match at Wigan Athletic.

If there were any grumblings from the home dressing room it was that they forced their fans to endure a tense second half after struggling to add to their early lead until Van Persie's arrival.

West Brom deserve praise for the way they reacted after falling behind, with Steve Clarke's side showing why they arrived in Manchester in sixth place in the table.

Despite the soggy conditions United passed it around in their usual effortless style. And the hosts broke the deadlock in the ninth minute when McAuley diverted Young's low cross into his own net after Graham Dorrans gifted United possession with a careless clearance.

Young, one of five players recalled to the United side, then unleashed a powerful drive from 16 yards which Foster did well to tip onto his bar.

Michael Carrick was denied by Tamas's clearance off the line before half-time yet the West Brom player was guilty of a glaring miss during his team's best period after the interval.

The Romanian defender was presented with a glorious chance to equalise from close range but instead headed the ball away from the United goal.

Peter Odemwingie also went close in front of the Stretford End before Van Persie completed the scoring with a delightful 90th-minute finish.

Three days earlier Ferguson had berated the match officials during his side's narrow win over Newcastle but this time he celebrated from the touchline as Van Persie curled the ball over Foster from the edge of the area for his 14th league goal of the season.

"He (Robin van Persie) is a fantastic player. He came on and changed the game for us.

"Every time the ball came up to him he got hold of it and turned on them. They were having to go back to their box all the time and he has done well.

"West Brom were a very resilient, stubborn team. They worked really hard on their defending and closed all their ranks.

"You have to deal with that but the slowness of the pitch killed our speed a bit."

"The fact they had to bring some of their big guns off the bench shows how well we were doing.

"In the first half we were too timid.

"We spoke at half-time about being too respectful and in the end, the scoreline doesn't reflect the way we played."