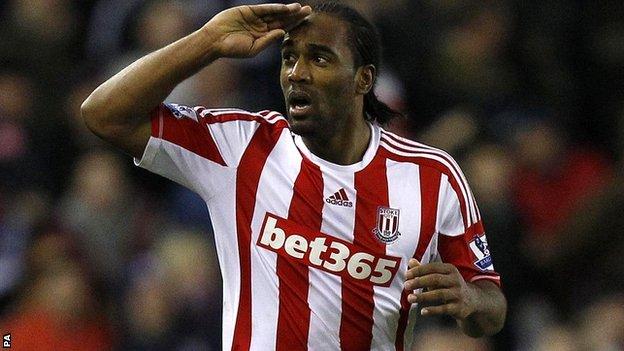 Substitute Jerome lashed into the top corner from 30 yards to rescue City after a poor first-half display saw them slip 3-1 behind.

Three times Saints took advantage of confusion in a City defence that was without suspended pair Ryan Shawcross and Geoff Cameron.

Rickie Lambert opened the scoring at the far post and, after Kenwyne Jones' backheeled equaliser, Jay Rodriguez profited from a mix-up, with Andy Wilkinson turning into his own net for the third.

The visitors should have made the game safe early in the second half, only for Guly do Prado to miss from the edge of the 18-yard box with the Stoke goal unguarded.

Alistair MannBBC Match of the Day commentator at Britannia Stadium

"This was one of the most entertaining matches of the season. Stoke showed they never know when they are beaten, and that last-gasp draw makes it 17 games undefeated at home in the league. For Southampton, who led for so long, what will those two dropped points mean at the end of the season?"

It was to prove a crucial moment as, soon after, Matthew Upson scrambled home from a corner.

With Stoke down to 10 following Steven Nzonzi's red card for a studs-up challenge on Jack Cork, Jerome produced his moment of brilliance to extend their unbeaten run to 10 games.

It was perhaps cruel on Saints, who fully deserved their half-time lead, but Stoke can justifiably claim they deserved a point for the way they battled in a second half. They had two penalty appeals turned down when Jose Fonte and Maya Yoshida appeared to have handled.

The Potters may be concerned, though, at the way the tightest defence in the Premier League was so easily breached without the presence of Cameron and, more importantly, Shawcross.

Nigel Adkins opted to partner Lambert with Rodriguez up front and, with Do Prado and Jason Puncheon impressing on the flanks, the Southampton manager's positive approach was vindicated.

Saints deservedly took the lead as Do Prado turned Ryan Shotton - in for Cameron at right-back - and crossed for Lambert to get ahead of Wilkinson and slot home.

But, from there, Stoke fell apart. First Lambert had time to collect a long ball, turn and float a cross into the box. Goalkeeper Asmir Begovic looked to have it covered, only for Robert Huth to deflect the ball onto his own bar, with Rodriguez able to tap into the empty net.

It got worse for the Potters when Puncheon collected the ball from a corner and delivered a cross that was turned past Begovic by Wilkinson after Lambert's knock-down.

Stoke improved after the break, but they should have been put out of the game, only for Do Prado to miss with the goal at his mercy. It was to be Saints' last real chance.

Upson pulled one back as the ball bounced around the Saints box, with Stoke then aggrieved as Mark Clattenburg waved away appeals for a penalty when Fonte looked to have handled as Jones jumped for a header.

The hosts' sense of injustice deepened when Nzonzi saw red, but Cork was arguably lucky to escape injury from the Frenchman's lunge.

Even though they were a man down, City continued to press, with boss Tony Pulis deciding that four of his 10 men should be strikers.

Jerome and Peter Crouch joined the action and after more scrambling in the Saints' box and the appeal against Yoshida, Stoke were finally rewarded for their spirit and persistence.

Jerome pounced on Crouch's knock-down to fire high past Davis to complete a breathless afternoon at the Britannia.

Stoke manager Tony Pulis: "I thought we were awful in the first half. That's as bad as we've been. We were poor defensively and gave poor goals away, and we looked off the pace. We were slapping ourselves on the back after the Liverpool game.

"But we ended up playing with a lot of commitment and desire and we think, even with 10 men, we should have won the match. It was a fantastic game for the supporters, but not for the manager."

Southampton boss Nigel Adkins: "Stoke have only conceded four at home all season, so for us to have scored three is outstanding for us. We weathered a storm and it took a wonder-strike for Stoke to get a point. We are always positive and we can always score goals.

"We have matured all season and it's excellent to win a point at Stoke. We have a team that are showing a great character and a great desire to do well in this division."