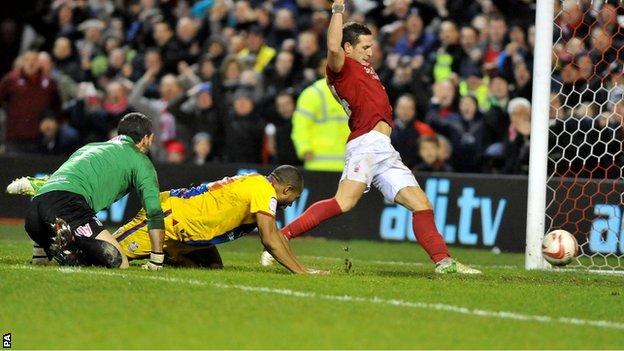 Glenn Murray gave Palace an early lead from close range, with Andy Reid levelling with a fierce volley on the stroke of half-time.

Palace took the lead with nine minutes left when Murray grabbed his second with a looping header.

But Billy Sharp pounced on a rebound three minutes into stoppage time to see the Championship clash end all square.

McLeish, who had only taken charge two days earlier following the sacking of Sean O'Driscoll on Boxing Day, received a good reception prior to kick-off at the City Ground.

The game had been in doubt because of the wet weather, but went ahead following two pitch inspections on Saturday morning.

Forest started sluggishly and fell behind after just nine minutes.

Dean Moxey's low cross from the left eluded the home defence, and Murray used the conditions to slide in and bundle the ball in for his 21st goal of the season.

The hosts gradually took a foothold in the game, and were inches away from equalising on the half hour when Sharp's diving header from a Radoslaw Majewski cross hit the post.

Glenn Murray moved ahead of Charlie Austin at the top of the Championship goal-scoring charts, finishing the game with 22 goals to the Burnley striker's 20

Forest went close in stoppage time when a chance for Elliot Ward was scrambled to safety, but Palace looked the better side after the restart with Wilfried Zaha's shot rolling just wide of the post.

An even second half looked to have swung Palace's way when Yannick Bolasie crossed to the back post, with Murray cleverly heading the ball back over Forest goalkeeper Lee Camp.

However, the hosts had the last word in the third minute of injury time when Sharp pounced. Speroni made a superb save to tip Dexter Blackstock's header onto the post, but Forest's top scorer was alert enough to knock the rebound past the Palace keeper.

There was still enough time for Murray to go close to claiming a hat-trick, but the Palace striker's shot was deflected onto the roof of the net.

The result leaves Palace in fourth place, three points behind Middlesbrough, while Forest end the year in eighth position.

Forest manager Alex McLeish: "I thought there was a lot of fighting spirit among the players. To their credit they went all the way to the final whistle.

"I also saw some great quality on the field today. Andy Reid was fantastic - what a game he had, and he was instrumental in the two goals. The one he scored was a peach."

Palace boss Ian Holloway: "I thought for 75% of the game we were a very good side and the lads are gutted because, like me, they feel we could have won the game.

"I was very proud of them; their work ethic was excellent and they played some exceptional football - as did Forest - in atrocious conditions."