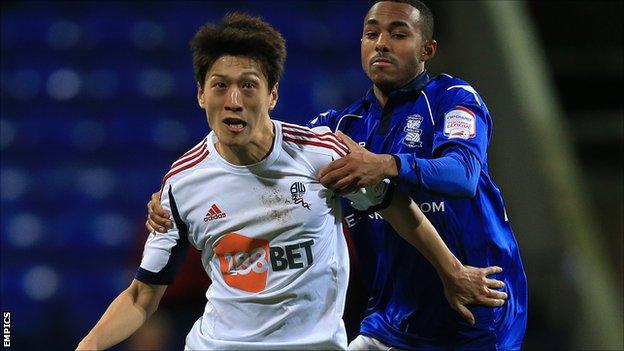 Bolton came from behind to earn a valuable victory against lowly Birmingham, who also had striker Nikola Zigic sent off late on.

Zigic had given Birmingham the lead with an early header.

But the hosts hit back to lead by half-time with goals from Marcos Alonso and Lee Chung-yong.

A second-half penalty from Keith Andrews settled the game and Zigic then saw red as Birmingham's three-match unbeaten run came to an end.

The result means Birmingham slip to 20th and are seven points above the relegation zone, while Bolton move up to 14th.

Bolton started brightly but it was Lee Clark's side who seized the advantage. Chris Burke's right-wing corner hung in the air and Zigic came through a crowded scene to nod home from six yards for his fifth of the season.

But the hosts did not have to wait much longer for the goal their dominance deserved after Tyrone Mears burst down the right and delivered a teasing ball for Alonso to provide the headed finish; outmuscling Curtis Davies to do so.

It got even better for Dougie Freedman's side just past the half-hour mark, Lee skipping past two defenders, rounding Jack Butland and squeezing the ball in from a tight angle.

The impressive Jay Spearing linked well with Kevin Davies and the veteran striker forced a smart stop from Butland as Bolton finished the half on top.

After the break Burke saw his 20-yard strike well held by Adam Bogdan as Birmingham began to grow into the game.

But after Steven Caldwell handled in the box, Andrews stepped up to calmly steer the spot-kick past Butland for 3-1.

Zigic was given his marching orders late on after picking up two bookings in little over a minute.

"Today we put everything together and to do it in front of the home fans is all the more pleasing.

"We targeted the midfield as an area where we could dominate the game today and we certainly did that throughout.

"We moved the ball around well and to get the win was great for everyone."

"We didn't play well at all. It was our most inept performance for many weeks.

"We allowed (Jay) Spearing and Andrews to dictate the game, which was what we had planned not to let them do.

"I heard a few rumblings from our supporters that we should be playing four-four-two, but (after Zigic was sent off) we now don't even have a fit or available striker for the next match, so how are we meant to do that?

"I'm absolutely furious with that performance today and I'll be working hard to address it."